Ainslie Allen (Rongowhakaata) has announced new dates for her Aotearoa tour in support of her debut album, BETTY. 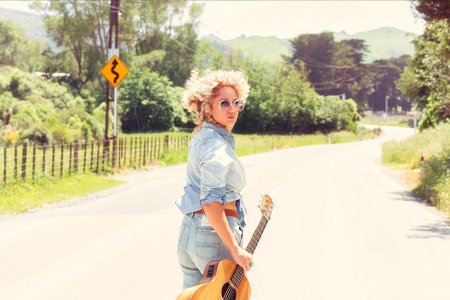 Listen to BETTY HEREThe BETTY tour finally hits the road this February after being rescheduled due to Covid restrictions. BETTY was released at the end of last year and debuted at #8 on the Official Top 40 NZ Album Charts.Tickets for the BETTY tour are on sale now HEREFeaturing on the Top 10 album BETTY, Ainslie’s singles ‘Done and Gone’, ‘You Think You’re (Better Than Me)’ and ‘Mama Says (Breaking Rules)’, plus the independent single, ‘Te Ua Ka Moa’, were all selected for NZ On Air - New Tracks. ‘Mama Says (Breaking Rules)’ and ‘Done and Gone’ were both added Across The Board to high rotation at ABC Country radio in Australia. Ainslie’s first Te Reo Māori release ‘Taku Māmā’ debuted at #4 on Apple Music’s New Music Daily, and was immediately picked up by Spotify's Waiata Reo Māori playlist (38k) where it sat for over a year and was 8 weeks on Apple Music’s Southern Craft playlist. The single 'You Think You're (Better Than Me)' was picked up to be part of Air New Zealand’s landing playlist in December 2021. Ainslie is NZ Country Music Entertainer of the Year, a double graduate of the 2018/2019 CMAA Academy of Country Music. She is 7 x finalist for the NZ Gold Guitar Awards 2019.After a lifetime in the public eye, Ainslie has grown into a performer with passion and style, a singer with hauntingly beautiful vocals, and now a songwriter with depth and vulnerability. As an artist she is not afraid to tackle difficult issues and she takes you on her journey in the brilliant debut album, BETTY. It's an honest story, and she tells it beautifully.Ainslie wrote her first song when she was just 8 years old. However, she has spent most of her career singing other artist's music, but she's ready to stand in her own spotlight now, her music, her story. Having so much stacked up against the final release of BETTY - moving dates numerous times because of COVID19 lockdowns and restrictions; also the sad passing of her producers' mum, and Ainslie having a wee baby to throw in the mix! Ainslie says; “Life is sometimes a hard wake-up call, having so much to juggle and to come out the other end with an album full of stories to be told, I’m very proud. I’m standing by all of this, as this is what has made BETTY.”

Saturday March 5, 2022 -
The Sherwood - QUEENSTOWN - 8pmMore dates to be announced!Tickets on sale at 9.00am Wednesday January 12 - HERE
Tickets are also available at the venues / door sales.