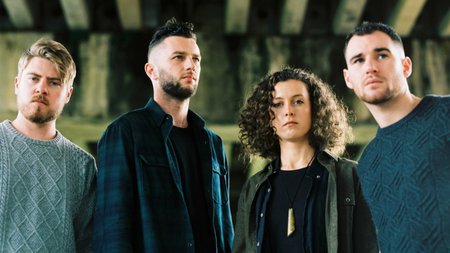 Since achieving international recognition from Rollingstone.com and Billboard.com for hit singles Too Strung Up and Stone Cold, and amassing over 3 million Spotify streams for their releases to date, Alae now unveil All Gived Up, their most anthemic single yet with a premiere through Australia's largest entertainment street press network, scenestr.com.au. The song has also debuted through Spotify's NZ & AU New Music Friday playlist this morning.

A transformative ode to resilience and the need to keep trying through the darkest of times, All Gived Up is the third single from their impending debut album ‘Henry St' which releases 26 October.

All Gived Up is the first song Alex Farrell-Davey and Allister Meffan wrote back in 2016 as a newly formed Alae, and it has stood the test of time to become an audience favorite during the bands live sets - thanks in part to bassist Marika Hodgson who now joins the band full time alongside drummer Jayden Lee. "For 2 years now we've been playing it live, developing it, and wondering if we could have done better," Alex states "With the addition of Marika and Jayden to the mix, we felt as though the song, and the band, has grown so much that we couldn't not re-record it. We can now give All Gived Up the treatment it truly deserves."

Alae will be supporting their debut album release with a national tour, presented by ZM.

Tickets are on sale now through www.undertheradar.co.nz

All Gived Up is out now through Spotify, Apple Music and iTunes.