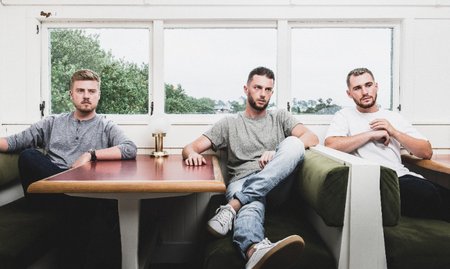 Following on from the streaming smash ‘Too Strung Up', which saw the Auckland 3-piece woo a legion of new fans across NZ, Australia and the USA, Alae return with an addictive ode to the mother of all drugs - love - on their brand-new track ‘Stone Cold'. The single made its premiere through USA music journal Atwood Magazine and debuts in Spotify's New Music Friday AU & NZ this morning.

‘Stone Cold' is a celebration of the complexities of new love and the conflicting emotions that arise. Introduced with a delicate guitar line, a building groove and an airy, effervescent chorus it's an aural embodiment of an emotional journey laid bare. Vocalist Alex Farrell-Davey explains - "Love is a consuming and confronting high - it can alter your perspective on everything. Once the hit sinks in, paranoia and the second guessing begins. The song goes on to accept the conflict as part of the whole experience and finally brushes it off in the chorus -"There's all these things that I want to do with you by my side. For the first time in my entire life, well, I don't mind."

Coming off the back of an epic headline show at Auckland's Music in Parks alongside Blackbird Ensemble, Tami Neilson and Julia Deans and support for Australia's John Butler Trio in Napier, Alae begin their 5 date NZ tour with Christchurch's Nomad tonight at Auckland's Galatos.

Nomad ‘Can You Feel It?' tour with Alae.

Tickets are available now from www.undertheradar.co.nz.

Alae have spent the last three months over the Summer break recording their debut album with co-producer Jol Mullholland at Auckland's LAB Studios, thanks to a NZ on Air New Music Project grant. "The release of our debut albums is something we have been working towards since we started two years ago," says Alex, "we can't wait to get it out into the world and share with our fans this June."

Stone Cold is out now through Spotify, Apple Music, iTunes and all other digital outlets.