Kiwi four-piece Alae follow up their summer smash hit Summer Thing with the brand new single Lucy, which is accompanied by a stunning video directed by Mardo El-Noor. The video, and single have already started making waves with a video premiere through Australian site themusic.com.au on Wednesday, and a spot on Spotify's AUNZ New Music Friday playlist this morning. 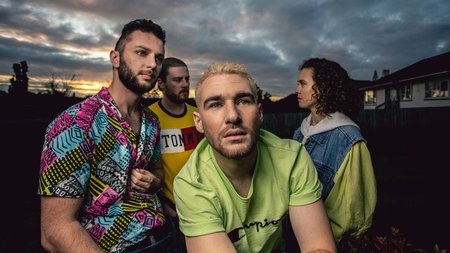 Continuing Alae’s laid back, groove-infused, indie-pop trajectory which began with the infectious ode to heartbreak, Hit Me Where It Hurts, Lucy is all about sitting back, relaxing and letting the outside world go. The song was created by Alae vocalist Alex Farrell-Davey and Dunedin musician Max Gunn during a song writing session in Auckland. Alex elaborates; “Max and I met at the SongHubs Auckland session in 2019. Our styles and direction meshed way better than we could have ever thought, so we started writing together in our own time. He’s responsible for the beautiful keys and sassy harmonies you hear in the track. It’s turned into an insanely fun track to play live.” The eye popping animated video is created by Auckland-based visual-artist Mardo El-Noor, who’s previous work includes music videos for Chores, Theia, Decades, Ha! The Unclear and many more. Eye-candy to the extreme, the video leans into the themes of Lucy, the sky, and the diamonds to full-blown trippy effect. The end result straddles the line between music video and pop art. Mardo explains; "I was inspired by the imagery of the song's lyrics. The music video is a visual free-association of colours and textures, words and shapes, narrative and abstract, while centred around the interplay between a purple-haired Lucy and a green-haired Mary Jane.”

While it’s been a challenging year for musicians and artists in the wake of Covid-19, Alae have continued to make their mark. After seeing in 2020 with a repeat slot at Gisborne’s R&V, the band have issued a second remix of Hit Me Where It Hurts with local hip-hop hero Kings, slayed the Big Gay Out stage in front of a 10,000-strong Auckland audience in February and unleashed the radio smash hit Summer Thing. This single hit the #1 spot on the Most Added Radioscope charts, Top 5 NZ Radio Airplay chart, debuted at #2 On the NZ Hot 40 singles chart and has been added to 1100+ playlists across Spotify and Apple Music alone. The video for Summer Thing is clocking in with over 59k views on YouTube since release. Taking the heat to the USA and Canada, Summer Thing was released late May to line up with the Northern Hemisphere summer, and has been featured across a selection of high profile blogs in the USA, with Alex securing an interview spot on Canadian show, Our City Tonight which is broadcast across Vancouver, British Colombia to over 9 million people per week. Expect more singles and live shows from Alae over the coming months. Lucy is out now through Spotify, Apple Music and iTunes.