Thanks to a songwriting pairing between Alae frontman Alex Farrell-Davey and acclaimed US-based producer Justin Gray during the APRA AMCOS Songhubs initiative in Auckland in March, Alae are thrilled to announce their record deal with Los Angeles indie label Anti-Gravity Records, and relationship with Warner Music Canada. 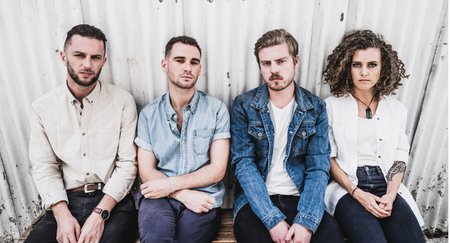 The fruits of this new partnership will deliver a new EP in early 2020 with the first single to be released this October. The EP was recorded over two weeks in May, in Los Angeles with label co-head Gray whose previous credits include John Legend, Avril Lavigne and Amy Winehouse to name but a few.

Alex Farrell-Davey states, "I remember as a kid always dreaming of going overseas to write music, and being inspired by NZ musicians who make the journey and come back with a collection of new sounds. Anti-Gravity Records, and Warner Music Canada have offered us a deal that has us sitting on the edge of our seats. We're so excited about the opportunities that lie ahead, and can't wait to share our new music with the world."

Brad Aaron, co-head of Anti-Gravity Records states, "Anti-Gravity Entertainment could not be more excited to have Alae join our intimate, yet growing family of artists. The energy this band offers the roster is just the beginning of the diverse, quality artists our team (alongside Warner Music Canada) gets behind. We look forward to a dynamic journey together for years to come."

Alae also support British singer-songwriter James Morrison on his ‘You're Stronger Than You Know' Tour with a show at the Auckland Town Hall on Tuesday 24th September.

Alae's impending EP release heralds a fresh new sound for the band and is slated for release early 2020.