The latest single from Albi & The Wolves explores the falling out of love, the heartbreak and heartache that comes with that. 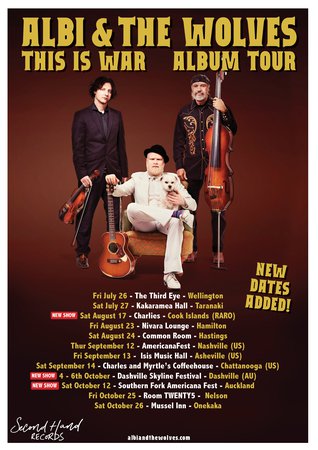 New single out today!
Listen here
Chris Dent is joined by one half of Looking for Alaska, Amy Maynard, in this tender duet. The male-female vocals play back and forth, with delicate and exquisite harmonies from the band, as we've come to expect. Adding tasteful electric guitar and keyboards is the other half of Looking for Alaska, Aaron Gott.
The single is the second off of their upcoming album, This Is War, due out July 26.
This Is War due out July 26, 2019.
The band hit the road at the end of July, travelling across four countries before finishing up at the Mussel Inn at the end of October. Joining the previously announced United States shows are an appearance at theDashville Skyline Festival in Australia and a one off show in Rarotonga.
Announced last week, Albi & The Wolves will be holding down the local slot at the Tuning Fork's Southern Fork Americana Festival. They join a star-studded lineup alongside Pokey LaFarge, The Felice Brothers and Tami Neilson.