It’s Te Wiki o Te Reo Māori and, like many New Zealand Acts, ‘te reo Metal’ band Alien Weaponry is releasing a new album this week. However, even though half the songs on Tangaroa are in te reo Māori, the release date for their sophomore album wasn’t planned around this week, or even around the month of Mahuru Māori. 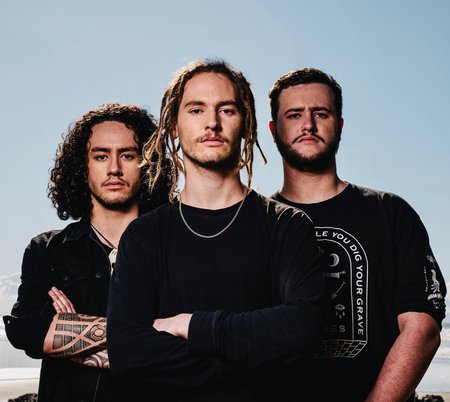 “It’s pretty cool that it has worked out this way,” says lead singer and guitarist Lewis de Jong (Ngāti Pikiao & Ngāti Raukawa), “but the album release was actually planned to coincide with our international schedule, as we are touring the USA with Gojira in October and November.”

Having released their first album, Tū, in June 2018 and toured overseas for much of 2018 and 2019, the band has observed a huge change in how te reo Māori is being used and received in NZ music and the media in the intervening three years.

“When we released Tū, it was definitely unusual to have songs in te reo Māori, and we were really nervous about how it would be received,” says drummer Henry de Jong (Ngāti Pikiao & Ngāti Raukawa). “This time, with so many mainstream artists translating their music into te reo Māori, it almost seems like English songs are in the minority.”

While the Māori voice in Aotearoa is growing strong, Alien Weaponry have also found that there is nothing to be feared from releasing their music in te reo Māori across the globe. Kai Tangata, the biggest hit off Tū, is a 7-minute anthem entirely in te reo Māori, with millions of streams on Spotify and 12 million views on YouTube.

Some Kiwi fans have questioned why Alien Weaponry appear to have been excluded from initiatives like the Waiata Anthems project, but there is a simple explanation, laughs Henry.

“Waiata Anthems was set up to as a platform to create te reo Māori versions of popular English songs. And since our songs are already in te reo Māori, we just don’t fit that format.”

Lewis adds, “People have suggested we translate some of our English songs, but for us the language we use in our songs is part of the emotion and ideas we are trying to express, and we feel fortunate to be able to make that choice ourselves.

While the band has a huge international fan base – they were called ‘The Future of Metal’ by UK-based Metal Hammer magazine and their music is played regularly on stations like Sirius XM across the USA; they have yet to feel the love from local mainstream radio.

“We’ve always had great support from Radio NZ, iwi and student stations, but with the groundswell of support for te reo Māori from just about every other part of the NZ music and entertainment industry, we’re hoping this year will be the year that even the big rock stations in NZ will turn a corner and playlist our Māori songs. Mahuru Māori would be a great time to start,” says Henry.

Tangaroa will be released at midnight on Friday 17 September, followed by a new music video for Hatupatu – a song based on the story of the band’s Te Arawa ancestor, Hatupatu, and his escape from the fearsome bird-woman Kurangaituku.