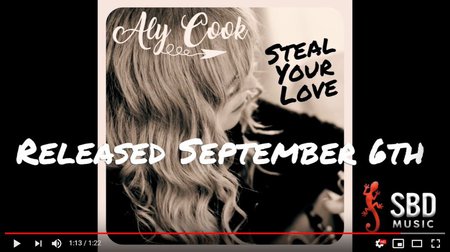 Over the past 3 years New Zealand singer songwriter Aly Cook has been touring back and forth from her base in rural Nelson, New Zealand to Australia.  During this time she established a friendship and writing partnership with producer and former Angels member Graham ‘Buzz’ Bidstrup and his wife Kay Bidstrup, who were also both founding members of iconic 80’s band GANGgajang. The songs from these sessions are the basis of Aly’s new album ‘Caught in the Middle’, a captivating mix of Country, Blues, Roots and Atmosphere, that includes a co-write with renowned Golden Guitar winner Allan Caswell. The CD also contains three covers, initially recorded by Aly for the up coming Asquith Sessions no.3 .

'Caught in the Middle' was produced by Buzz Bidstrup and recorded in Australia at Asquith Studios Sydney. Helping Buzz to record and mix was David Nicholas, a multi ARIA award winning producer / engineer whose resume lists credits on hit Australian and International albums including INXS, Jimmy Barnes and Sir Elton John. The musicians on the record include legendary session musicians including members of ‘The Tracking Crew’ with Buzz on drums (The Angels, The Party Boys, Jimmy Barnes), Rick Melick on keyboards (Jimmy Little, Joe Bonamassa), James Gillard on bass guitar (Mondo Rock, Mental as Anything) and the late Glen Hannah, a master guitarist who has appeared on many great Australian albums, and  who sadly  passed away during the recording of this album. Others to lend their talent were Dean Ray (X factor) on acoustic guitar, Clive Harrison bass (Kush, 3 Little River Band reunion albums), violinist George Washingmachine and John Kaldor on pedal steel. Asquith Sessions featured singer Jon Abo joined Aly, Buzz & Kay Bidstrup on backing vocals. As a special treat, two songs feature guest vocals from a long time friend of Aly’s, multi award winning artist Sharon O’Neill.

The pre-release album track is 'Steal Your Love’ (listen here) by Lucinda Williams and is one of 3 covers on the 12 track album. It is a  favourite song of Aly’s and was cut live in one take by the all star band.

The album is now accessible for reviewers and Aly available for media engagements. Aly will be in Australia 18th September - 23rd of October promoting the album, including appearing at Mildura Country Music Festival 27th September - 6th October, Canterbury Country Spring Fling Oct at Canterbury Hurlestone RSL  & Tasmanian Independent Country Music Awards 19th October. Aly will be returning to NZ and available to speak to Media in Auckland 24th and 25th of October, before heading off on a short tour with NZ Cricket Legend/Singer Songwriter John Wright & The Souwesters which includes appearances at the Tauranga Arts Festival on Oct 29th , Auckland (details coming soon)  and a charity event for Wellness North Canterbury at Rangiora Hall