The performers at the National Country Music Awards, provided an electric night of entertainment as the awards for recognition of achivement were handed out. Futures Artist Aly Cook took out for Female Country Artist of the Year 2012 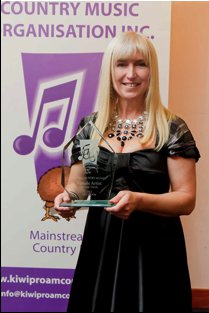 "I am elated! It's taken a life time to get to here and I thank the Kiwi Pro-Am for the opportunity of these awards that recognise the great acheivements New Zealand Country Recording Artists are gaining both in New Zealand and abroad."

"To all the mums out there that think you are too old to achieve your dreams ... or you think you can't debut as an artist, because your not a "young musician" ... its only you that stops you from being whoever you want to be"

Its been a full on year for Aly promoting her debut album at 48 years of age. Using crowd funding to raise the funds to record and Social Media to promote. This coupled with Aly performing in both Europe & Australia, a number of times in the last 12 months and gracing Australian airplay charts with Midnight Sun, have been a pinnacle of lots of hard work.