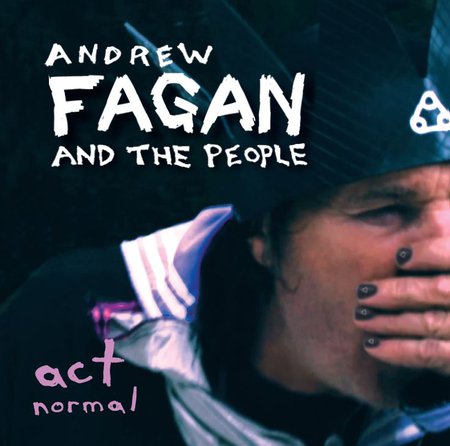 Returning with gleeful antagonism, and never one to favour an understated approach, one of the pioneers of kiwi new wave, Andrew Fagan reveals a second track off his upcoming album as Andrew Fagan and The People. Watch and listen to title-track Act Normal here. Listen to Act Normal (single): Apple Music | Spotify Watch official music video Act Normal here: https://youtu.be/dQATNMiL3_wOne of two tracks on the new album written for his offspring, a song filled with tongue in cheek wisdom for navigating life."They’re almost here, so scull your beer, Act Normal
Take one last drag, then hide the bag, Act Normal
Watching the rooters breed, having a real big feed,
Aberrated species pumping out the faeces.
Such a shame that time dictates our limits, so just remember all of the good bits.
Travel on like you will last forever, and try to do your best and act clever.
The sun won’t always shine… Act Normal.”

Last month Fagan shared a sardonic take on the social media era, releasing four versions of ‘On Channel Me’ through Facebook and YouTube, letting fans choose the version to appear on the finished version of the album, due for release on February 10th, 2020 on Southbound.

Fagan’s career spans over 40 years, from his time as frontman of punk rock group The Ambitious Vegetables and New Wave group The Mockers to his ongoing solo career.

His solo material over the years, performing with his band Fagan and The People, includes laconic social commentary classics such as ‘Exciting’, ‘Astonishment’, ‘Now You Know’, ‘Blame Me’, ‘Get Light’, ‘Religion’, ‘Messiah’ and ‘Jerusalem’.

Fagan’s last release, the spoken word album of poetry titled It Was Always Going To Be Like This coincided with his New Zealand tour with British poet John Cooper Clarke in 2018.