Andrew Fagan and his band return to venues across the North Island in April to perform songs from his solo and Mockers years, and celebrate acclaimed new album Act Normal. 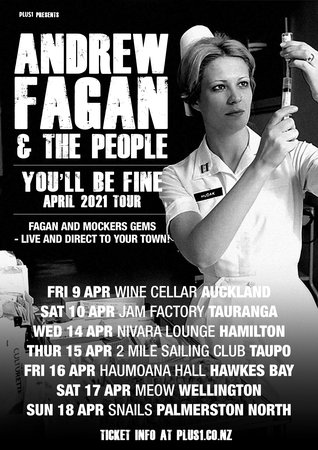 Tickets on sale from 8am today at Plus1.co.nz here: https://www.plus1.co.nz/andrewfagan

Fagan’s career spans over 40 years, from his time as frontman of punk group The Ambitious Vegetables, pop-rockers The Mockers, to his ongoing solo career.

His solo material over the years - performed with his band Fagan and The People - includes laconic social commentary classics such as Exciting, Astonishment, Now You Know, Blame Me, Get Light, Religion, Jerusalem, and On Channel Me.

New album Act Normal was released on the cusp of lockdown, so the band are jumping out of their skins for this delayed release tour.

To coincide with Fagan’s first live shows in 14 months, new single You’ll Be Fine will be released in early March.

“Andrew Fagan was king for a day as The People rose, played, and sang along, with him as he rocked the Anthology Lounge with his usual bravado, elegance and regency,” David Boyle, Radio 13, February 2020.

This tour is made possible by the Aotearoa Touring Programme.

Andrew Fagan in The Mockers, One Black Friday: https://www.youtube.com/watch?v=r6Ycs9WjCdc

Complete tour information is at plus1.co.nz