Powertool Records celebrates its 20th Anniversary in a big way on Sunday June 6th (Queen’s Birthday weekend), dusting off a top-shelf 38-piece tool box of local rabble-rousers to celebrate twenty years of alt-rock and almost 200 releases. Tucked away in West Auckland, in an unassuming industrial section of New Lynn, is a cluster of hidden treasures: the venue UFO, the record store Alien, and the Powertool label. 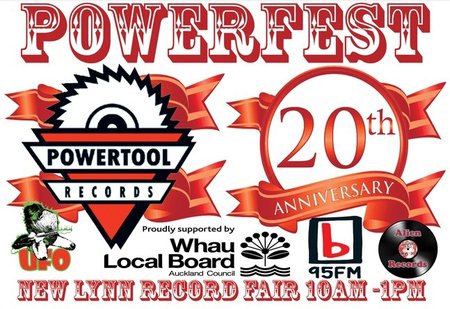 Driven since 2001 by founder Andrew Maitai’s unflagging passion for independent music, Powertool Records has become one of New Zealand’s most prolific labels. Powertoolhas released over 200 albums, and organised thousands of shows and tours (yes, really).

Powertool Records is celebrating with Powerfest, a 10-hour music festival at the New Lynn Community Centre, running from 10am ‘til 10pm on Queens Birthday Sunday June 6th. Open to all ages, across four stages, with absolute legends playing alongside some of Tāmaki Makaurau’s most exciting up-and-comers.

Powerfest In association with 95bFM, the Whau Local Board, UFO and Alien

Where to start with highlights from this lineup? We’ve picked out a few for starters, but all the acts are well worth a look. Keep an eye on the Powerfest Facebook event page where each of the artists is being introduced over the next few weeks.

X-Features – Before Fetus Productions was The Features, formed in 1979 by Jed Town and James Pinker. Drawing from the likes of Public Image Ltd, Wire, the New York no-wave movement and Town's passion for late period Beatles, The Features offered a far more experimental and jagged sound than most of their peers and were immediately popular.

Mary – This is the incredibly special reunion of a band who, in the late 1990s, had a string of much-loved sugary pop hits. Their album Maryland (released on their own label Panty Record) followed on from the success of their previous EP releases Bigger (1998) and Golden Halo (1999). Mary performed at the Big Day Out, Sweetwaters and Orientation, and supported acts such as Supergrass, Catatonia, The Lemonheads, Bare Naked Ladies, Spiderbait, Blink 182, Tonic, Guitarwolf and The 5,6,7,8's.

Ripship – are a Sci-Fi-themed psychedelic rock duo from West Auckland. They are regulars on the 95bFM Top Ten; you may have heard their spaced-out songs ‘Plume of Europa’, ‘Man After Man’ and ‘Lube the Cube’.

Loud Ghost – Led by the mercurial Darryn Harkness (New Telepathics, King Ketchup, Hallelujah Picassos and more), the band released its second album All In A Day in March this year. Their live show is a powerhouse of groove and intensity, with songs of protest and celebration.

Gold Medal Famous – A formerly Wellington-based trio of 21st century subversives who specialise in avant-garde pop and “eclectotronica”. They went on hiatus when Chris Wilson and Tamsin Grigg moved to Dunedin, but it’s not all bad news – Chris Wilson has just released the highly acclaimed compilation of Dunedin artists, And It Could Be Right Now. A Gold Medal Famous live show is always a treat - and can include audience interactions with Theremins.

Vorn is one-third of Gold Medal Famous, and one of New Zealand’s most unsung solo artists. Grant Smithies said, “Here’s a man capable of wringing great pop from the bleaker aspects of modern urban life”, and Simon Sweetman said, “Colgan is one of this country’s greatest songwriters, never cloying or faux-romantic; these are direct songs, honest, cynical, sincere, hilarious and in many cases ridiculously catchy”. Sadly in 2019 he was diagnosed with terminal cancer, so please do grab any chance you have to see him.

Tickets from Under The Radar.