Anthonie Tonnon has released a new single and announced the upcoming release of his third full-length album, Leave Love Out Of This. 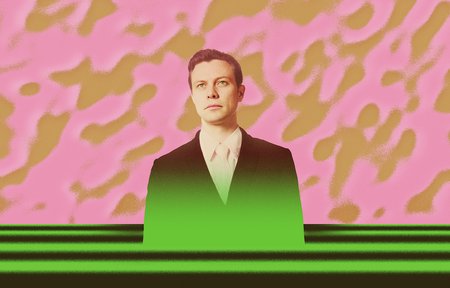 Listen to / download ‘Entertainment’Pre-order Leave Love Out Of This

The first single from the album, ‘Entertainment’, is out today and will be accompanied on April 9 with a video produced by Sports Team.

Leave Love Out Of This will be released on July 16 on Slow Time Records (UK/EU/NZ), Misra Records (North America), and Flippin Yeah Records (AUS). The album is available to pre-order now via anthonietonnon.com, slowtimerecords.com and all good record stores.

The album will be available on vinyl, CD, and as a green vinyl Deluxe Edition LP, with a bonus 7” record.

It will be the first release on Slow Time Records that is not by the label’s founder, acclaimed Dunedin-born songwriter and performer Nadia Reid.

Reid says: “I’d always dreamed of starting a label in New Zealand. I’d worked hard as a DIY musician for years and enjoyed the ins and outs of running my music career with a business sense lens. I see Slow Time Records eventually becoming a stable of like-minded artists – artists I have a connection with, admire, and who also have a tie to Ōtepoti Dunedin, my current home and the place I grew up.

Having toured nationally and internationally with Tonnon, and being a fan since forever, it’s a perfect fit that he let Slow Time release his album here in New Zealand, and in Europe.”

Pearce says, “This is our idea of what it sounds like when the digital meets the fleshy. We have blunt fingers and thumbs, and we have to create handles and knobs and sliders for ourselves. We can’t really see or really know what our devices are doing; we have to accept what they do, and make something with that.”

Tonnon and Pearce recorded Leave Love Out Of This between 2017 and 2020, and in that time, Tonnon’s practise evolved heavily. He began incorporating new technologies into his work, including the Wellington-designed Synthstrom Audible Deluge – which he would later use to control music and lighting in his immersive show for planetariums, A Synthesized Universe.

The artist expanded this creative approach with an annual tour of a show titled Rail Land, which transports audiences by rail to musical performances at remote community halls. The show combines historical research and spoken word narrative with the use of the technologies he developed as part of A Synthesized Universe.

At his recent 2021 Auckland Arts Festival performances of Rail Land (March 18 and 19), Tonnon announced he was partnering with Nadia Reid and Slow Time Records for the release of Leave Love Out Of This.

On ‘Entertainment’, Tonnon and Pearce move beyond the 1970s technology that powered Successor – and into electronically generated percussion, and textures that blur the lines between organic and synthesized sound. Guitars are set against synthesizers, and drums against drum machines, in a story about an athlete who is given a once-in-a-lifetime chance at a career in television.

Though his sound has evolved over time, Tonnon’s deft lyricism has been a constant. The artist tackles the rise to the top of the television industry in ‘Entertainment’ as expertly as he did evolution and the future of work in ‘Two Free Hands’, and environmental disaster and regulatory failure in ‘Mataura Paper Mill’. Tonnon has been long-listed for esteemed songwriter title the APRA Silver Scroll Award three times, making it to the top five for ‘Water Underground’, his excoriation of the mismanagement of fresh water and democracy in Canterbury.

Work on both ‘Entertainment’ and Leave Love Out Of This began in Auckland, at Pearce’s studio on Karangahape Road. However, after Tonnon relocated to Whanganui – and with Pearce touring constantly after the runaway success of The Beths’ first album – the pair continued their collaboration at a distance.

The final mix of the single was completed by Pearce in Chelva, Spain, at the home of Lil Chief Records’ reclusive head Scott Mannion, which had become a refuge for The Beths between international tours. Drums and bass on ‘Entertainment’ were contributed by Tonnon’s long-time band members Stuart Harwood and David Flyger.

PRE-ORDER LEAVE LOVE OUT OF THIS