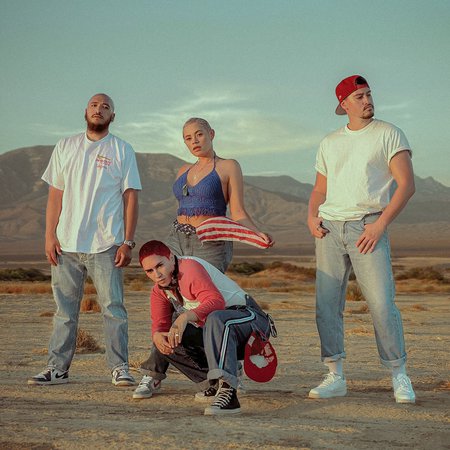 Listen to JOYRIDE HEREJOYRIDE encapsulates that hot summer feeling; driving with the top town, singing at the top of your lungs to your favourite songs with your best mates, and together absorbing the sound of freedom. Packed with high energy electric guitars and Omer Gilroy’s powerhouse vocals shining throughout each of the nine tracks, JOYRIDE is “the soundtrack to your past, present and future.”“This album is a real mix of songs that needed a lot of time on, plus songs we managed to smash out just like that,” says Omer Gilroy. “‘California’ and ‘Loser’ were created in our loft in LA and being in that space was so inspiring towards our sound, which we think you’ll hear!”Written by Rebel Reid and Omer Gilroy, with instrumentation by bassist Josh Dolan and drummer Jesse Pakipaki, JOYRIDE was recorded, mixed and mastered at Village Studio in LA, Roundhead Studios in Auckland and Moonlight Sounds. To capture the band’s energetic performance and magnetic energy as a group, the album was recorded live.“Through creating this album and deciding to record it live, we really found the sound and style we actually all love,” explains Omer. “There’s something freeing about recording live and leaving in all the “live” elements and details in that you’ll hear. The pop/rock element comes through which we just sink into, and we loved tapping into that 90s American band era; when it really was just free and in the moment.”Also featured on JOYRIDE is the hard-hitting rock anthem and current radio single, ‘Lights Go Down’, which has been receiving airplay across The Rock, KAOS, Bayrock and The Generator and recently debuted at #9 on the NZ Hot 20 Chart.Valkyrie is a four-piece band formed in Auckland, New Zealand. Valkyrie is fronted by powerhouse lead singer Omer Gilroy (Nga Puhi, Ngai tahu) and electrifying guitarist Rebel Reid (Nga Puhi). On percussion is the talented Jesse Pakipaki, and on bass is the melodic Joshua Dolan (Tainui). Valkyrie crafts a wide range of escapist and original songs written about real life experiences. On stage they explode with raw energy, precision and audience participation. Achievements include a nationwide tour, favorites at Splore Festival (3x), Soundsplash festival and opening for New Zealand's biggest band Six60 (2021). Valkyrie’s debut EP went straight to the top of the NZ heatseekers chart. Their single ‘Good Thing’ has shot to over 2000 playlists.JOYRIDE has your summer road trip soundtrack set, with Valkyrie providing the carefree vibes and good energy with today’s debut album release. The album has been a long time coming, with Omer saying: “This era of our sound is equally fun and relatable; we want to share our vibes with as many people as we can! This is one for the big kids - play this loud during your summer JOYRIDE!”Listen to JOYRIDE HERE