Banana Mundo Is on Tour!

Banana Mundo is touring around the North Island to celebrate the release of "The Kaponga Cumbia Club" the band's third single release from the upcoming debut album called "Hola" due to be released in April 2021. 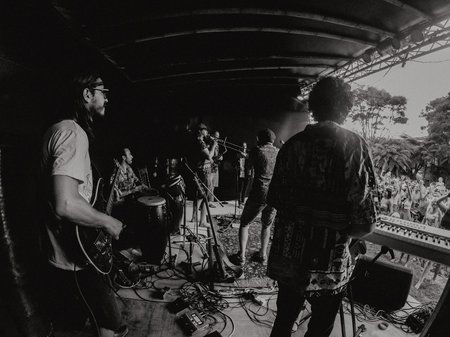 The eight piece band Banana Mundo will play a show at the Hawke's Bay Latin Dance Club on Friday 5th March 2021 together with a live DJ set from the  Alzbeta Tango Project. On Saturday 6th March at the Vogelmorn Hall in Wellington together with Cumbia Blazera & The Night Kitchen and on Sunday 7th March at the Newtown Festival in Wellington.
Banana Mundo is a collective of musicians from around the world. Members from Argentina, Uruguay, Venezuela, France, Switzerland, England and New Zealand bring together an infectious worldly mix of upbeat multilingual Latin and Afro Beat tunes.

Banana Mundo grew out of the house party jam sessions Andre Manella held throughout the winter of 2018.
Gradually, these jam sessions morphed into a band that plays Afrobeat & Latin grooves, named after a popular fruit. These days, despite national tours, booked out gigs and an enthusiastic fan base, Banana Mundo still retains the lively feel of a group of friends enjoying music together.

Banana Mundo's latest single "The Kaponga Cumbia Club" is a song that grew out of the completely-made-up-but-still-true story of the amazing events in the small rural Taranaki town of Kaponga. Many years ago, a farmer decided to dig under a 40 foot container and turn it into an underground Latin Club, where the locals could sample cumbia rhythms and bootie shake all night on the dance floor. "The Kaponga Cumbia Club" is a tribute to this mythical club, a song that will get you grooving. Available on all digital music platforms from Friday 26th Feb 2021.

You can expect lots of dancing to this irresistible contagious mix of Latin and afro beat. Tickets for the Napier and Wellington shows are on eventfinda.co.nz