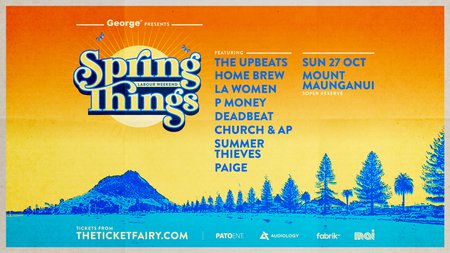 A host of the hottest acts around will feature on Spring Things: Labour Weekend - a Kiwi music extravaganza being held in Tauranga on Sunday, October 27.

Situated at Soper Reserve, right in the heart of the bustling beach resort of Mount Maunganui, it’s expected tickets to the R18 event will be snapped up. Punters are urged to get in quick for what promises to be ‘the’ Labour Weekend party of 2019.

Tickets go on sale Thursday, September 19 at 7.00pm from www.ticketfairy.com

The Upbeats: Their unique and organic take on 170bpm+ bass music has seen them make their home in the highest echelons of dance music worldwide. Known for their organic and natural sounding drums, The Upbeats are a pillar in the DNB community. The duo have collaborated with stalwarts such as Noisia, Shapeshifter Bad Company, Foreign Beggars, Mara TK, and Mefjus to name a few. In September 2014, their collaborative EP with Shapeshifter, BLOODSTREAM, reached no.1 in the NZ iTunes Charts two days after being released.

Home Brew: This critically0acclaimed hip-hop collective have earned their stripes with their distinct feel-good sound and sincere lyricism relevant to New Zealand culture. In 2010 Home Brew were shortlisted for the NZ Music Awards Critics Choice Prize, going on to release their self-titled debut album in 2012, hitting #1 on the NZ album charts and winning Best Urban / Hip Hop Album at the New Zealand Music Awards.