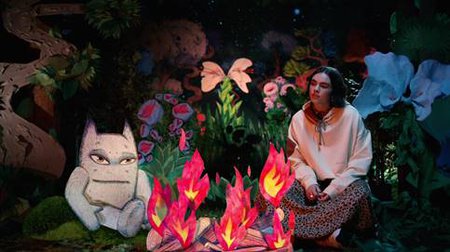 Buzzing 19-year-old indie pop artist BENEE unveils the video for her latest single ‘Glitter’ from her debut EP FIRE ON MARZZ. The video was directed and illustrated by Steven Mertens.

Of the video, director Steven Mertens says, “I envisioned an animated dream world for BENEE to inhabit along with a monster sidekick and as many bizarre characters as I could cram into the span of three minutes, while using many techniques to give it a unique feel. Our alien forest was created using a combination of live action, stop motion, CGI, photo collage, coloured pencil drawings, rear projections and amazing felt sculptures made by Jack Reed.”

BENEE chimes in saying, “collaborating with Steven on a fun space monster video was a perfect example of the BENEE vision in full flow.”

Next month, BENEE will play a slew of headline dates in North America for her “Lil North American Tour”— including shows in Brooklyn, Boston, Washington, D.C. and Toronto. Tickets are available now athttp://benemusicc.com/.

After her very own headline tour, BENEE will join Conan Gray for select dates on his “Comfort Crowd Tour” in December.

BENEE recently made her mark on the world with her critically acclaimedFIRE ON MARZZ EP, which features ‘Glitter,’ as well as her breakout hits ‘Soaked’ and ‘Evil Spider.’ The EP has been praised by Billboard, NYLON, Marie Claire, Clash Magazine, Wonderland, Flaunt Magazine, Vice’s i-D, Idolator, Ones To Watch and many more.