Rock icon BILLY IDOL, known for a plethora of hit singles including “Rebel Yell,” “White Wedding,” “Dancing With Myself” “Eyes Without A Face” and many more, returns this summer to perform at The Outer Fields, Western Springs on Sunday, January 19. Sharing the stage for an epic Sunday afternoon and evening of live music are seminal New Zealand artists Stellar* and Elemeno P. 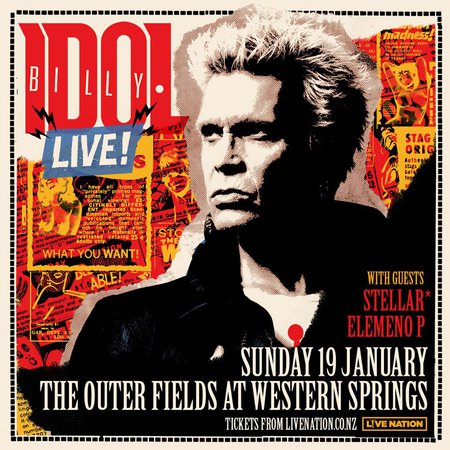 With Stellar* and Elemeno P

For complete tour and ticket information head to www.livenation.co.nz

Artisanal beers, wines and great food, as well as fun attractions, will add to the festival ambience of the day. The event is GA/All ages so bring the family and settle in for a late Summer’s Sunday of great entertainment.

An early architect of punk rock's sound, style, and fury, Billy Idol remains to this day a true rock 'n' roll icon. From punk pioneer to global superstar, Billy Idol has left an indelible mark in popular music and remained a household name for over three decades. His style, music, and attitude have transcended time and trend. Born in 1955 in Stanmore, North London, Idol spent several formative years living on Long Island, NY as a child before returning to the UK and emerging as a central figure of the British punk movement. As part of the infamous Bromley Contingent and a fan of the Sex Pistols, Idol was inspired to front the pioneering British punk band Generation X from 1976 until the band’s split in 1981. Determined to break through in America, Billy Idol hooked up with guitar genius Steve Stevens and a crucial musical partnership was forged.

Idol’s lip-curling sneer and fist-pumping persona vaulted him into the mainstream as one of MTV’s first megastars, making him one of the most recognisable faces in pop music, while selling out arenas everywhere he played.  He has sold 40 million albums while scoring numerous platinum albums worldwide, nine top forty singles in the US and 10 in the UK.  Hit singles include ‘Dancing With Myself’, ‘Hot In The City’, ‘Eyes Without A Face’, ‘Rebel Yell’, ‘Mony Mony’, and arguably Idol’s most famed song ‘White Wedding’.

Legendary four-piece band Stellar*, fronted by the dynamic singer/songwriter/guitarist Boh Runga, are Sony New Zealand’s highest selling Kiwi band. Dominating the airwaves and charts throughout the early 2000’s Stellar* boast three Top 10 albums, 9 Vodafone New Zealand Music Awards and a legion of fans throughout the country. Known for their pulsating live performances, Stellar* return in 2020 to perform a series of special shows to celebrate the 20th anniversary of the release of their 5 star debut album MIX. That album sold 80,000 copies (5 x Platinum) and generated five top 20 singles – ‘Part Of Me’, ‘Violent’, ‘Undone’, ‘Every Girl’ and ‘What You Do (Bastard)’ – all massive radio singles and indelibly etched in the Kiwi music landscape.  Expect a dynamic set featuring MIX in full, more hits, plus their killer version of Sharon O’Neill’s ‘Maxine’ – which took the 2017 Vodafone NZ Music Awards by storm.

In the early 2000’s Elemeno P erupted onto the New Zealand rock scene, seemingly from out of nowhere.  A four-piece with straight-arrow, energetic, power-pop anthems. A succession of massive hits such as ‘Verona’, ‘Every Day’s A Saturday’, ‘Fast Times in Tahoe’ and ’11.57’ followed.

Equipped with a fun-loving attitude, Elemeno P soon became household favourites across the nation, releasing a trifecta of top tier albums in the space of six years.

The band’s debut album ‘Love & Disrespect’ was released in 2003, reaching number #1 on the New Zealand album charts and went on to sell triple platinum. Two more albums would follow, selling Platinum and Gold respectively and leading to the band taking home Best Group at the New Zealand Music Awards in 2008. Elemeno P make a welcome return to the stage in January 2020.