New Zealand's own hip-hop supergroup of african-descent BLKCITY (Raiza Biza, JessB, Abdul Kay, Blaze the Emperor and Mo Muse) follow up a show-stopping headline set at Splore with the release of the music video for their latest single, he afrobeat-flavoured 'Pogba', created by BLKCITY and rising music video creator Connor Pritchard. 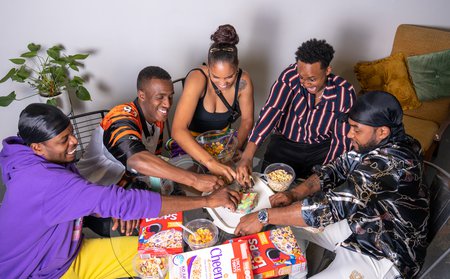 BLKCITY share the video after an exclusive premiere on Afropunk, with writer Nathan Leigh saying, "New Zealand super-group BLKCITY brings together some of the hottest vocalists on the island for a sound that highlights their diasporic roots."
Afrobeat has been consumed and loved by many African nations for generations, and 'Pogba' celebrates the achievements of Manchester United star and Football World Cup winner with France, Paul Pogba. Set to an afrobeat beat by Cameroonian producer Tony EF Beats, the track is the third from the group’s forthcoming album which is set to be released in the middle of 2021. Following on from ‘Flying’ and ‘Salsa’, ‘Pogba’ reflects on the lives of the five rappers as young African-New Zealanders, and showcases their prodigious talent and ability to move effortlessly through different styles of hip hop. 'Flying' and 'Salsa' were Spotify favourites landing on many playlists and gathering over 600,000 streams and 'Pogba' is sure to delight BLKCITY's growing audience.

“Sport and hip hop have always been synonymous,” says Blaze The Emperor, noting creating a track about a multi-title holder and world champion like Pogba is both ambitious and fitting for what he believes is BLKCITY’s greatest track yet.

“'Pogba' is intended for all african diaspora spread across the globe.” says Mo Muse. “The genre of afrobeat is now popular music, particularly West African instrumentation which is what you hear predominantly in 'Pogba'."

"Afrobeat is a sound/genre that in recent years has become more well known throughout the world, and New Zealand is no exception to this," says JessB. "We are excited to continue the introduction of an afro-influenced sound to the wider hip-hop listeners and fans here at home."

Made with thanks to NZ on Air.

JessB
Winner of the 2019 MTV European Music Awards for Best New Zealand Act, over the likes of other NZ legends such as Benee and Drax Project, JessB has quickly made her mark in New Zealand music. Her discography boasts well over 3 million streams, and collaborations with award winning artists such as Baker Boy, SWIDT, and more recently a live cover with G Flip on Triple J radio just to name a few. Along with her musical releases Jess has toured extensively across New Zealand and Australia performing in most of the big festivals in both nations in the past couple of years, garnering a huge trans-Tasman following as a result.

The diverse range of festivals and events include Venice Biennale, Rhythm & Vines, Northern Bass, Auckland City Limits and Splendour in the Grass, Jess is stamping her authority as a powerful female rap artist, breaking down barriers and creating opportunities for other female musicians.

Raiza Biza
Heralded as the first African music artist in New Zealand to have his music crossover to a larger audience; Raiza’s decade long legacy in NZ hip-hop is undeniable. As well as completing countless sold-out tours in NZ, Raiza success internationally is just as impressive. With a feature in the international platform ‘Colors’, His music has also been added in high rotation on Australian radio stations such as Triple J, Double J and RRR. He has also toured Australia, Europe and China on a number of occasions along with working on music with award-winning artists such as Oddisee, Sampa The Great, Black Milk, DJ Spinna, REMI, cementing Raiza’s name as an NZ Hip Hop legend.

Mo Muse
2019 saw Mo Muse as the Winner of the NZ Vodafone Music Awards Pure Potential stage, the release of his critically acclaimed debut project “The First Generation LP”, a feature on David Dallas’ Redbull-backed “64 bars” project, and subsequently emerging as one of the most exciting upcoming talents in New Zealand Music. His debut NZ tour in 2019 also sold out 3 cities, and he’s been featured in every major music blog and news outlet in the country. The astonishing achievements in one year alone, coming from being a completely unknown artist has shown Mo’s potential in becoming an important figure in the future of NZ hip hop.

Blaze the Emperor
Kiwi-Rwandan rapper Blaze the Emperor started making music in 2011 as part of Auckland hip hop collective, Beneath The Hype. He then embarked on a solo career collaborating with fellow Kiwi-Rwandan, Hamiltonian, and MC Raiza Biza and his AmmoNation collective.

Blaze has toured New Zealand, Europe and China both as a solo act and as part of AmmoNation. He’s released several singles, as well as a solo EP Western Heights, which came out in 2017, debuting at #1 on the iTunes hip hop album charts.

Abdul Kay
Abdul Kay emerged as the one of the most exciting young talents in the NZ hip-hop scene debuting as the first artist on the David Dallas curated Redbull-backed “64 Bars” series. The video went on to amass over 200,000 combined views across YouTube and all socials. With over 800,000+ streams on Spotify with just 3 official releases, Abdul has one of the most engaged audiences. With performances at Northern Bass, and a huge debut single, critics note Abdul's music to be "laced with confident flows, sharp rhymes and unmistaken urgency”, and one to watch out for in the future.