9th January 2021 will see the live on stage return of Bay Of Plenty / Auckland underground metal act Puppeteer after a 5 year hiatus. 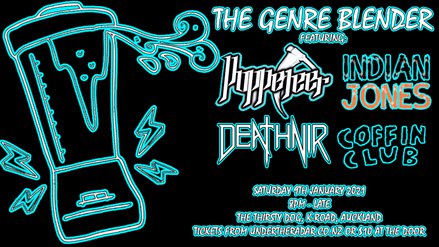 Formed in 2008 by a group of school friends, Puppeteer enjoyed a career releasing 2 independent Albums sharing the stage with the likes of Shotgun Alley, Sonic Altar, Killing Yourself for Profit & Deathnir before taking a break in 2015. The band returned in 2020 with a release of their latest Single, a cover of Amon Amarth’s “Twilight of the Thundergod” along with a re-worked / re-recorded version of their own song “Child” from the upcoming re-recorded release of  the band’s first album “Tucked In By Brutality” due out later in 2021.

Puppeteer will be joining their old friends Deathnir along with new friends Indian Jones and Coffin Club at the Thirsty on K Rd on 9th January 2021 for a Genre Blender of a show which is sure to appeal to all tastes. Tickets for which are available through Under The Radar.