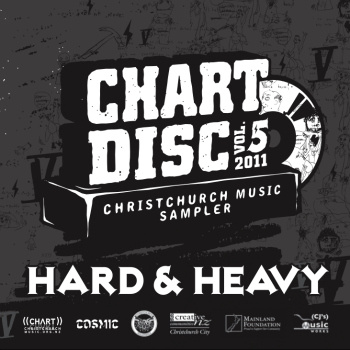 Emerging from the Christchurch dust and rubble like a black phoenix comes
a no nonsense selection of hard rock and metal underground classics. Taste
the high energy delights of grunge, hard rock, hardcore, punk, thrash and
death metal in a diverse collection of visceral, elemental and at times
downright face melting tracks.

These often overlooked genres are staunch, proud and possess fiercely
loyal fans. Rarely are these bands lifted into the bright lights of the
public eye but again as Otautahi (Christchurch) rises from the seismic
challenges, this selection showcases the beautiful musical diversity in
the south, with an ability to charge ahead, throw the horns and dive into
the mosh.

CHART artist representative Marc Royal explains "for a number of years now
there has a been a huge musical sub culture that exists within
Christchurch. Over this time we have seen the inception of many great rock
and metal bands and it's fantastic that we can now showcase some of our
top acts to the rest of the nation on the Hard 'N Heavy CHARTDISC".

Tim Facoory from leading metal act Tainted lends his support to the
project "Christchurch has so much to offer in these genres and the fact
that CHART have recognised this, created this compilation and enabled to
be released for free is huge".

Grab a copy now from Galaxy Records, Penny Lane Records and the RDUnit in
Christchurch or nationwide from Cosmic, Musicworks and Marbecks. Select
copies also available at the Christchurch Arts Festivals' ‘Thursday
Sessions' and the CHART Live Stage at ‘Garden Variety' at the Real NZ
Festival in Hagley Park and the Dead End Derby at CBS Arena Oct 8th.

CHARTDISC Volume 5 has been hand-picked to be turned up loud, and is for
promotional/broadcast only.

Available nationwide from 1 September 2011 as an eco-friendly CD pack from
the following outlets and stores FREE while stocks last.

SUEDE ARCADE - Over (Flat Out)
Described as the sound of a 44 Magnum smashing your collar bone, these
lads know how to stoke the rock n' roll fire.
facebook.com/suedearcade

LUPUS LUNAR - Back To The Ocean
Wailing dual guitars and sliding power riffs from 90's influenced
‘earworm' alt rock quartet take us back to a world where it all began...
lupuslunar.bandcamp.com

NONE LEFT STANDING - Time Is Now
Hardcore punk heroes keep it real with fuzzed out chainsaw guitars and a
frontman who can scream it with the best of them.
facebook.com/noneleftstandingnz

HUMAN - Blasting Through The Foreheads Of The Dead
Grindcore death metal stalwarts raise the cadavers and explore the dark
city's depths.
human-metal.com