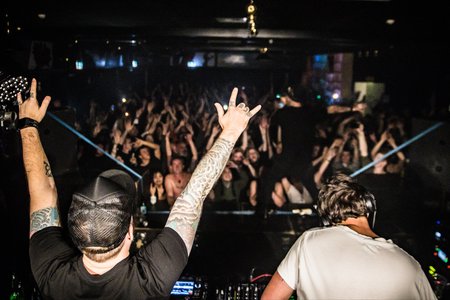 The relationship with Klute is not a new one, he released Concord Dawn's 'Take Me Away' in 2002, and 2007's collaboration with Hungarian legend Chris.SU 'Sceam to the Stars/Ice Age' in 2007.

"The label has always been about forward thinking, melancholic, melodic, techno influenced drum and bass, and as soon as we made 'Acres, the first track we made together, we knew Commercial Suicide would be the logical home." says Matt.

"'Surgeon Wobble' is a on a bit of a deeper tip, '1999' has an old J Majik or Virus kind of vibe, and 'Fenris' is a bit more of a jungly/ravey affair. So there are a few flavours in there, but all referencing older drum and bass."

The EP and recent tour are the first in a decade from the original Concord Dawn pairing, with the shows receiving a rapturous response from fans - so much so that Concord Dawn will play two more shows in Auckland and Raglan next month.

According to Matt, it wasn't just the fans that had a good time:

"It was an absolute pleasure to play back to back for some of the most up for it crowds we have ever seen! Lots of people said it was a vibe they haven't felt in a long, long time and we were stoked to see a packed dancefloor with smiles on their faces when the lights came on. Looking forward to another couple of shows at the end of August before taking a break till next year."

1999 is out today via Commercial Suicide.

31 August Auckland @ Neck Of The Woods

Tickets on sale via Cosmic Ticketing