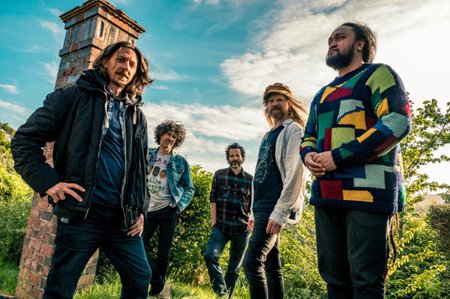 Fresh off the back of the Strange Caravan national tour, Congress of Animals celebrate the coming together of old friends and new songs with the release of their self-titled, long playing collection of recorded works, ‘Congress of Animals'.

The album features tracks written by Age Pryor, Nigel Collins, Justin Firefly Clarke and Ben Lemi with Bret McKenzie and Deanne Krieg joining the wider ensemble on additional performing and production duties. As you'd expect from an eclectic collection of some of New Zealand's most loved musicians, lush harmonies, beautiful melodies and intricate arrangements are the uniting force across these 12 unique tracks, which include the singles Astral Tumbleweed (Justin Firefly Clarke), Depends on You (Nigel Collins), Burning Sun (Age Pryor) and Ben Lemi's new single ‘To The Lookout' which also releases as a single today.

Wellington based Ben Lemi may be best known for his drumming work with iconic New Zealand band Trinity Roots, but there is far more to Ben than meets the eye. A deft multi-genre instrumentalist, singer, record producer, soundtrack composer, multimedia artist and former turntablist, Ben is also a member of French for Rabbits, Dawn Diver and The Adults and is the finishing piece in the Congress of Animals musical jigsaw, after meeting Justin, Bret and Nigel in 2015.

Told in first person from the imagined perspective of a complete stranger that came to Ben's house one day, ‘To The Lookout' is an account of a peculiar encounter that took place in the garden outside Ben's house. "The memory of this interaction really stuck with me as a combined feeling of sympathy for this person who appeared so obviously troubled to my eyes, and then the regret of feeling inhibited from reaching out with a more generous degree of compassion."

"When I brought the song in to the studio it was very much a sketch with lyrics intact and a vague idea of instrumentation but over a few months we managed to refine a "rhythmic feel" and expand the form of the piece. A majority of the CoA tunes were nearing completion in the studio by the time ‘To the Lookout' was thrown on to the pile, so much of the flavour of the extra production elements were informed by the groups collective aesthetic."

The ‘Congress of Animals' album release has been the fruit of 2 years of recording work between the collective, who have been at the mercy of conflicting schedules and differing cities while shaping the project together. But as the saying goes, pressure can turn coal into diamonds. "The privilege of working with Maestro Lee Prebble at Surgery Studios was never something to take for granted", Ben explains. "Time is precious so we've all had to assume a very focused mindset for the sessions. I think it's fair to say that the time spent tracking and mixing over the last 2 years has been necessary to allow for gestation on a few levels and it has been in the studio where we've learned a lot about each other's qualities and quirks, which has only added positively to the end result."

Congress of Animals' self-titled album, featuring Ben Lemi's single, ‘To The Lookout' is available now through Spotify, iTunes, Apple Music and where all quality music can be found.