Countdown to Villainy’s RAISED IN THE DARK Tour! 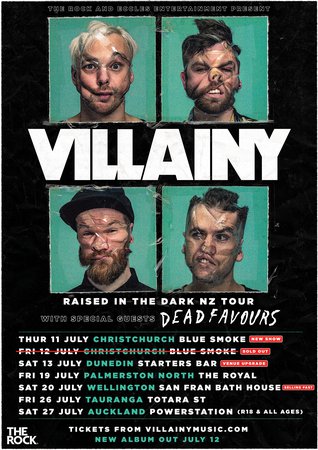 Villainy are gearing up to hit the road in July for their first headlining tour in two years. After selling out the South Island leg of the tour, they’re adding a new date in Christchurch to cater to demand and upgrading their Dunedin show. The Kiwi rockers are also pleased to announce Dead Favours will be joining them on all shows and, in Auckland they’re teaming up with Smokefreerockquest to give one lucky band the chance to open for them at the iconic Powerstation. See below for more details. Presented by The Rock and Eccles Entertainment, the tour marks the July 12 release of Villainy’s third album RAISED IN THE DARK and kicks off with an already sold out show at Blue Smoke in Christchurch on Friday, July 12. A second Christchurch date - Thursday, July 11 - has now been added.

The new Christchurch show will go on sale at midday on Friday May 17 from www.villainymusic.comWith the Dunedin show on Saturday, July 13 also sold out, the band is moving to a larger venue and will now play at Starters Bar.See full list of shows and venues below and get tickets to all shows HEREFans of the band have already had a taste of what’s to come on their upcoming third album RAISED IN THE DARK, with the recently released single ‘Dreams’. A powerful anthem, which sets out to inspire and provoke with its generational catch-cry “No-one gives a f*** about your dreams”, it is Villainy at their most potent.

Pre-order RAISED IN THE DARK here. To celebrate, Villainy have invited Dead Favours and She Loves You along for the ride.Dead Favours will open for the band on the entire tour. A force to be reckoned with, the Kiwi rockers have an impressive live resume, which includes a support slot on the 2018 Rise Against Wolves Tour; opening for Royal Blood and playing to packed crowds at Rock the Park and Homegrown. Listen to their new single ‘Lost On You’.

Alt-rockers She Loves You will also join in the celebrations, playing the Palmerston North, Tauranga and Wellington shows. Inspired by late nights, wine, and a mutual love for the Arctic Monkeys, the band’s motto is musical exploration and madness. Listen to their new release Dirty Orlean. It makes for one hell of a tour and if Kiwi rock fans want to be part of RAISED IN THE DARK celebrations, they’ll need to get in fast as remaining tickets are limited. Don’t miss the most highly-anticipated local rock tour of 2019.Tickets from www.villainymusic.com

At the All Ages gig at The Powerstation in Auckland, and paying tribute to their Rockquest roots, Villainy are working with Smokefreerockquest to offer up the opportunity for an emerging act to join the bill.

The competition, powered by Eccles Entertainment and Smokefreerockquest, will be run via social media, sending potential participants onto a page on the Smokefreerockquest website - where they will be provided with all the information and registration form.

This is an open competition with one round. Bands enter by making a video of the band playing three original songs.
The videos are also uploaded via Youtube.
Bands must be able to play a 30 minute set.