Off the back of their sophomore album, 'Everything Is As It Shouldn't Be' Daniel Armstong and his 5 piece band, The Monsoons will embark on a six-date tour around Aotearoa. Rescheduled from 2021 this tour marks the beginning of a big year for Daniel Armstrong & The Monsoons including international touring and word of a third album. 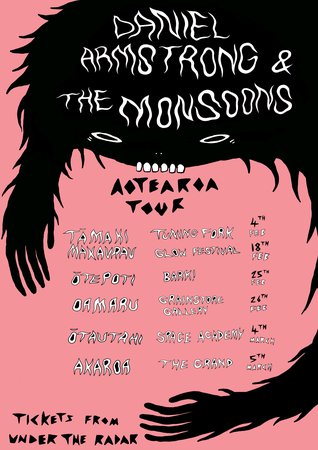 The new album ‘Everything Is As It Shouldn’t Be' is a commentary on living in an anti-culture bubble, that is separate and obsessed with a world that doesn’t exist outside of a cellphone, looking into an unknown future where technology has killed a big part of human existence. The album borrows in varying degrees from The Velvet Underground to Nina Simone, Scott Walker to Radiohead.
"With an indie-rock vibe emitting from Daniel’s Telecaster together with his melodic storytelling, I found myself in a time capsule with the 60’s band The Velvet Underground and singer-songwriter Bob Dylan to which the resurgence of rock and roll themes were polished and played upon."
Back to Artist News