DEVILSKIN AND KORA BAND TOGETHER TO ANNOUNCE NATIONWIDE WINTER TOUR

NZ musical legends DEVILSKIN and KORA band together to co-headline a nine-date winter tour across the country, kicking off in Palmerston North this June. This winter tour will see an epic accumulation of songs that put these bands on the map, tracks like Kora’s infamous Pop Your Bubble, Drop Dead Killer and Carolina and DEVILSKIN have a host of songs from their three #1 albums including crowd favourites like Voices, Pray and Start A Revolution. These two iconic Kiwi bands will join forces for a must-see tour promising big songs and a formidable live energy that is not to be missed! 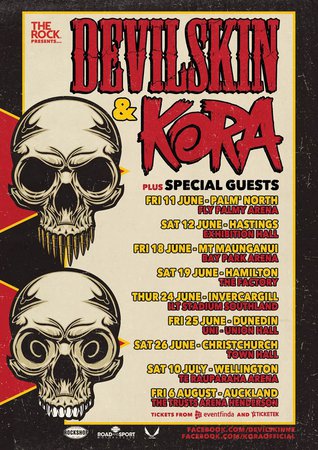 Devilskin and Kora will play:

- Friday 11 June at the Fly Palmy Arena in Palmerston North

- Saturday 12 June at the Exhibition Hall in Hastings

- Friday 18 June at the Bay Park Arena in Mt Maunganui​

- Saturday 19 June at The Factory in Hamilton

- Friday 25 June at the University Union Hall in Dunedin

- Saturday 26 June at the Town Hall in Christchurch

- Friday 6 August at the Trust Arena ​in Henderson, Auckland

Tickets available for all gigs at 7.30am on Thursday 22 April from Eventfinda and Ticketek.

Starting out as four brothers from Whakatane, KORA erupted onto the NZ music scene in the early 2000s and as their momentum grew so did their band members as local muso Dan McGruer joined them on bass, guitar, and keyboard. Shortly after Dan joined the group, The Volume EP was released in 2004 and then the band quickly developed a reputation as being one of the nation's finest live acts with their debut LP, the eponymous “Kora” which went to number 1 in the New Zealand charts, spending a year in the top 40 and reaching double platinum status.

Live performances at festivals including the Big Day Out cemented KORA’s reputation as a live force in New Zealand and beyond. Original band member Francis Kora (vocals, keys), alongside Dan McGruer (keys, samples), Marika Hodgson (bass), Darren Mathiassen (drums), Richie Allen (guitar), Karlos Tunks (guitar, BV’s) and Hirini Kora (guitar, keys, BV’s) will be joining DEVILSKIN on their nine-date winter tour. Francis Kora states, “Kora are super stoked to do a run of shows with the kick ass rock band Devilskin, and just to add they're the nicest people on the planet. A chance to play across parts of New Zealand we haven't played in for a while. Look forward to seeing you guys there.”

Hard hitting Kiwi band DEVILSKIN have garnered a solid fan-base worldwide from their relentless touring schedule. A swathe of brilliant live reviews from Europe to USA to Australia are testament to the groundswell of support for this hard-working and focused New Zealand act. Always thrilled to play on NZ soil, DEVILSKIN bassist Paul Martin states, “Having shared the stage a few times with Kora over the years, most notably Rock the Park a few years back to 18,000 people, we noticed a real similarity to their ethos and ours, namely their connection to the audience and the powerful energy they work up during their shows. Kora’s reputation is as solid as it comes. The passion, spirit, and honesty in their music as well as the strong family bond really resonated with us. Music is all about feeling good, standing up for yourself and celebrating and enjoying each others’ gifts. These shows are going to so be much fun. We can’t wait to take this on the road and share the magic and the message of family, love and unity with as many people as we can.”