Drax Project are heading home for two shows this July. 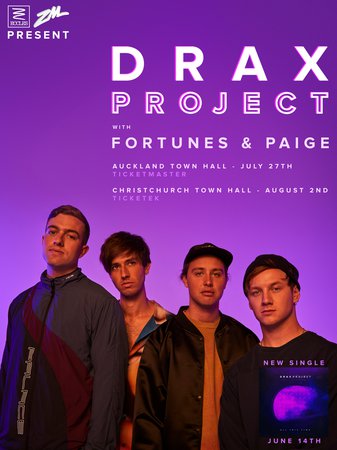 The Wellington band, who have been taking their addictive blend of pop and live performance to the world, will play the Auckland Town Hall on Saturday, July 27 and the Christchurch Town Hall on Friday, August 2.

Presented by Eccles Entertainment and ZM, Drax Project will be joined by talented Aussie-based Kiwi r'n'b electro duo, Fortunes and one of New Zealand's most exciting new acts, singer and songwriter, Paige.

Drax Project will be playing every song off their upcoming debut album, along with their regular live show favourites.

Tickets on sale from Ticketek (Christchurch) and Ticketmaster (Auckland) from midday, Friday, June 7.

In the space of a few years, Drax Project have gone from busking on the streets of Wellington, to selling out their own headline tours and opening for some of the biggest names in music-from Ed Sheeran, and Lorde, to Brian McKnight, Golliraz Soundsystem, SBTRTK and Six60.

Their surprise #1 radio hit - and NZ ‘Song of the Year' - ‘Woke Up Late' (UMG NZ)saw them sign global recording deals with Lyor Cohen's 300 and Simon Cowell's Syco labels. They went on to release an international version of the hit featuring Hailee Steinfeld, receiving Top 40 radio airplay all over the world-peaking at #26 in the US, currently sitting at #10 in Australia and climbing as high as #3 across 'international' stations in Hong Kong and Singapore. The song has now had more than 100 million streams.

Songs like ‘Toto', 'Only Us' and 'Prefer - with millions + streams on Spotify - and the soon-to-be-released live favourite ‘All This Time' - have also earned Drax Project a position as one of New Zealand's most popular bands.

They are fast becoming one of this country's most successful pop exports too, touring Europe with pop queen Camila Cabello, releasing videos with Liza Koshy; and playing major slots at the likes of iHeart Music Festival in Las Vegas and Rolling Stone Magazine's pool party atCoachella, along with headlining their own sold out shows in New York and London.

Having themselves been given an Auckland Town Hall support slot for Six60, it's appropriate that Drax Project should invite up-and-comers Fortunes and Paige to open at their New Zealand shows.

Fortunes, who are signed with Future Classic (Flume), have established a strong following across Australia and New Zealand with their signature sound of electro pop, soul and r'n'b led by vocalist Conor McCabe and producer Barnaby Matthews. Their latest single, ‘Disc Read Error' was released at the end of March and has had close to 200k streams on Spotify. This follows on from their 2017 EP release, UNDRESS.

Endorsed personally by no other than pop icon Billie Eilish, Paige is the singer-songwriter from Auckland has quite literally won the world over with her self-filmed DIY videos. Combined, her singles ‘So Far' and ‘Alignments' have had 1.3 million streams on Spotify. She has also opened for international acts, such as George Ezra and Nina Nesbitt and featured on the song ‘Slow Dive' with Balu Brigada.

Don't miss out on the chance to see threeof New Zealand's most exciting young acts. Tickets to Drax Project's NZ shows have often sold out in minutes, so get in quick!

Eccles Entertainment and ZM presents Drax Project,
with support from Fortunes and Paige