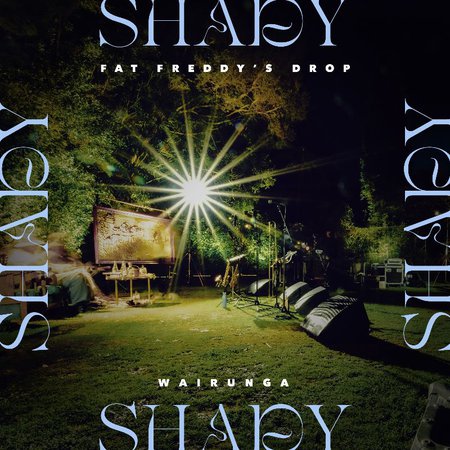 'Shady' continues Freddy's Afro-Acid adventures with Fitchie’s beat-making tapping into a South African township brand of techno of which Freddys experienced on tour. A visit there in 2016 opened their eyes and ears to the wonders of township culture, with the local brand of techno - known as Amapiano - settling deep within the band's musical brain. Years later its fingerprints are all over Fitchie's beat-making on this track - paired with Dukie'sincantatory vocals, delicate synths and richly harmonised horns.

Watch 'Shady' get the live treatment via the upcoming WAIRUNGA Concert Film being live streamed on on Sat 31 July at 9.00pm, plus a repeat screening on Sunday 1 August at 8.00am. You can watch the premiere broadcast online for free at Fat Freddy’s Drop
YouTube and Facebook.

Triple whammy from Fat Freddy’s Drop! The acclaimed band is dropping WAIRUNGA, a bush-alchemy album and concert film like no other, with an Aotearoa New Zealand tour to celebrate the surprise release. WAIRUNGA finds the Freddy juggernaut digging deep to debut five songs and revisit two classics captured in an outdoor performance sans audience with wild weather elements playing an important creative role.Freddys embark on the national WAIRUNGA Album Release Tour in September taking in some of the country’s top venues, starting at the iconic Christchurch Town Hall and a long-awaited return to play the Dunedin Town Hall. Both shows feature special guest Harper Finn. Freddy's roady continues at Nelson Trafalgar Centre and Wellington’s Michael Fowler Centre with special guest Deva Mahal. Finals shows are Auckland Town Hall and Hamilton’s The Factory with special guest Rubi Du.In lieu of international touring, Freddys have been exiled to their BAYS studio using the time to jam and boil up songs at their leisure. Freddy trumpet alchemist Tony Chang says that "with a swag of fresh material ready for road testing all the group needed was the right space to perform and record. Wairunga, high above Waimarama Beach, got the nod."Wairunga, deep in Ngāti Kahungunu country, is a place etched into the DNA of Fat Freddy’s Drop who’ve roamed here for over 20 years; to party, relax between tours, make a song 'Wairunga Blues' in its honour, and even to get married. Farmed by the Parker family for a century, Wairunga is an oasis of green pasture and native tree-filled valleys that fall away to the ocean below.Throwing caution to the trade winds, literally, Freddys and their sound and visual recording crews set up on a grass tennis court surrounded by a bush backdrop. The weather was calm but as the performance progressed into night, the elements turned with tempest-like bursts of rain and chill winds. Freddys dug deep to finish the session, nothing could stop the bush energy and music.“We were definitely at the mercy of the elements there and the elements let us get away with it”, Tony Chang says.In Freddy's inimitable fashion the new tunes run a gamut of genre-busting styles. 'Coffee Black' is layered with cosmic hot buttered soul and cinematic wigged out psyche-blues while 'Shady' continues Freddy's Afro-Acid adventures with Fitchie’s beat-making tapping into a South African township brand of techno Freddys experienced on tour.'Bush Telegraph' is a reggae classic featuring MC Slave aka Mark Williams on the mic with freshly minted yum char spiced rhymes of hope. The other new tracks, 'Leave Your Window Open' and 'Dig Deep', are loose rhythmic experiments that the band have been working on for a long time. Versions were developed, rehearsed, but then set aside – dismissed, demonised - only to be revived with new energy in some future moment of creative cohesion. The results are loose-limbed; broken and bruised beats smashing into subterranean bass and twisted up melodies. Freddys love playing this stuff.'Bones' and 'Wairunga Blues' are the two classics from Freddy's vast back catalogue. Off the Blackbird album, 'Bones' has aged beautifully - like a fine wine - the song’s component parts matured and melded together in harmony and balance. DJ Fitchie rates this 2021 vintage superior to the 2013 original. 'Wairunga Blues' has been a work-in-progress since it was released on Bays in 2015. Kuki dials up some appropriately off-kilter keys to match the wonky-funk laid down by Fitchie’s bass line and the horns. It’s a mighty comeback – and a fitting tribute to this magical place.The new album will be available on 20th August on digital platforms with limited edition vinyl to follow. The WAIRUNGA session was recorded by Freddy's long time sound engineer Richard McMenamin of Western Audio. Freddy’s beat maker and master producer Fitchie aka MU processed and crafted the live WAIRUNGA audio recordings at BAYS studio while Calyx Studio in Berlin nailed the final mastering.Another Freddy collaborator, Transmit, captured the music in the making session at Wairunga for an accompanying concert film that will broadcast online as free appointment streams on 31st July and 1st August. The WAIRUNGA project builds on the success of Freddy's LOCK-IN album and concert film recorded last year at Michael Fowler Centre sans audience that resonated with the bands legion of fans worldwide.The LOCK-IN featured guitarist ManRaro aka Ned Ngatae who has been guesting on Freddy's live shows in recent years. For WAIRUNGA ManRaro was an integral part of shaping the music and performance, stepping up as an official Freddy band member in place of guitarist Jetlag Johnson, the second ever change since the band began in 1999.“ManRaro is another element just like the weather in Wairunga", Chang says.