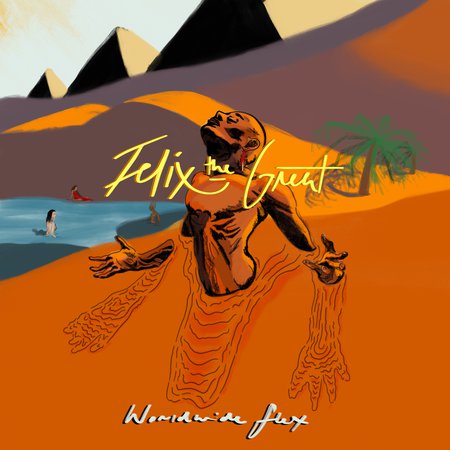 ‘Worldwide Flex’ is a collection of the most forward thinking Hip hop, Rap, R&B, Dance and Afropop music written through the eyes of a pop singer songwriter. ‘Worldwide Flex’ was written, recorded, performed, mixed and mastered by Felix the Great both at his home studio in Auckland, New Zealand and his home studio in Melbourne, Australia. The album artwork was designed by Drew Brown and depicts the arising of an African king (Felix the Great) by an Egyptian-esque oasis.

“I decided to name the album ‘Worldwide Flex’ because the album has mass appeal on a worldwide scale. Flex because the album flexes my range as a singer-songwriter, rapper, producer and audio engineer”, says Felix.  Sonically the record was inspired by Saint JHN, the Weeknd, Burna Boy, Wizkid, A$ap Ferg, Skepta, Post Malone, Khalid, Swae Lee, GoldLink, Frank Ocean and Maleek Berry.

To promote the release of ‘Worldwide Flex’ during this global pandemic, Felix will be releasing weekly video episodes dissecting each song on the album for ten weeks and thereafter releasing a companion acoustic album to show a raw and vulnerable side of the album.

Felix the Great is the most slept on hit maker in Australasia! Since emerging in 2018, his catalogue has earned him not one but five consecutive iTunes chart appearances with singles No Sleep, Come Closer, The Zone, Reset and latest single Nothing Was the Same. The Zimbabwean-New Zealander residing in Melbourne, Australia is proficient in production, song-writing, singing, rapping, audio engineering and artist management.

His music has reached fans across the world gaining over 20, 000 streams after being added to official playlists “R&B Feels” and “The New Australia” on Spotify and Apple Music. Having played headline slots in New Zealand and support slots in Australia, Felix’s live show is a raw and captivating spectacle.

2020 is the crowning year for Felix the Great launched his independent record label WORLDWIDE FLEX ENTERTAINMENT on January 24th, 2020 from which he plans on releasing his debut album called ‘Worldwide Flex’ on May 29th, 2020. ‘Worldwide Flex’ is collection of the most forward thinking Hiphop, Rap, RnB, Afropop and Dance music written through the eyes of a budding pop star.