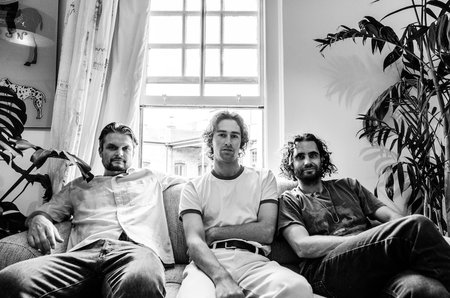 The release is accompanied by a brand new video for lead single ‘Eternal’ which harnesses all the cut-loose dancefloor vibes the collective are celebrated for. Featuring an array of colourful footage of their sold-out parties and a behind-the-scenes peek at the album recording process, the video is the perfect primer for Flamingo Pier’s album release tour this July.The euphoric grooves of 'Eternal', as well as previously released single ‘Last Call’ co-produced by and featuring Aotearoa Jazz legend Nathan Haines, along with vocals from Jess Penson (Kédu Carlö), are gathering up plays on commercial radio giant George FM and alternative radio across the country alike. ‘Honey’ and ‘Make You Wonder’ celebrated an entry on the NZ Alt Charts last week.

Channelling classic emotive house, to disco, Afro and jazz funk on their debut album, Flamingo Pier cite a wide range of musical influences such as Khruangbin, Roisin Murphy, Peven Everett, house legends Masters at Work and Brazilian artist Tim Maia. This translates into an uplifting but nostalgic current running throughout the album - reflecting on last chances, soul-searching and longing for the carefree days of the dance floor.

In celebration of the album release, these music makers and DJs are throwing a few parties for themselves.

TICKETS ON SALE NOW - from www.flamingopier.net
In 2019 and 2020 Flamingo Pier released two widely lauded EPs on UK's tastemaker Soundway Records, garnering support from UK electronic duo Maribou State (Ninja Tune), American radio host, DJ, and producer Tim Sweeney (Beats In Space), BBC 6 Music DJs, The Blessed Madonna, and JD Twitch to name a few. But like many artists in the last 12 months, the group had to navigate the unfamiliar territory of intermittent lockdowns to write and record an album. The silver lining of this however, was that this was the first time that members Luke Walker, Brad Craig, and Dominic Jones were able to create the record in person together instead of collaborating over the internet - because usually at least one of them has been travelling overseas.

They wrote most of the album together in 2020 in Auckland with a swing of local musicians contributing to the recording, including fellow Soundway act Julien Dyne on drums, saxophonist Nathan Haines, as well as Jess Penson (Kédu Carlö). The group centred the album around the power of shared joy, after what has been a very difficult year for many people. “By being a source of joy for others, you amplify that joy for both yourself and those around you, rather than losing anything,” reflects Flamingo Pier's Luke Walker.