Last October, knowing it would be unlikely for the band to tour their new album The Overflow internationally due to Covid-19, New Zealand dream-pop band French for Rabbits headed to their local bowling club. In the charming surroundings, they performed three songs from the Taite Music Award nominated record and captured it on film with director Martin Sagadin. 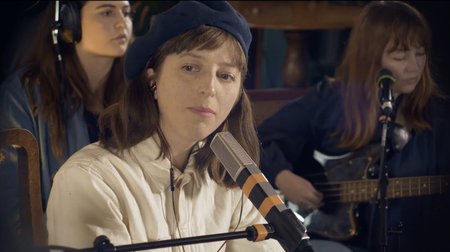 “We wanted to share three of our favourite songs from the album to play live for those who we can’t get to around the world. It was a real treat to be able to present these songs in an environment where we feel totally at home, and for us to share a little bit of what our live show might be like – with fantastic film work by Martin Sagadin and Samuel Austin, and mixing by Ben Lemi”.

Today, the video will be premiered on YouTube ahead of the last show of their New Zealand album release at The Tuning Fork, Auckland on Friday 13th May. Auckland tickets HERE.

The video features their songs “The Outsider”, “Nothing in my Hands” and “Money or the Bag”. It was filmed with the support of Independent Music NZ (for their online showcase Going Global).

Filmed at the Vogelmorn Bowling Club - with thanks to the Vogelmorn Community Group for allowing us to use the space. Thank you to Massey University for support with lighting and film equipment.