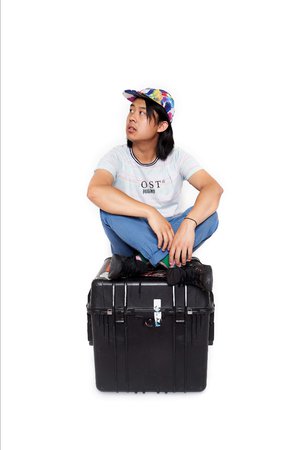 Listen to the album HERE The 10-track album has been a labour of love, which has evolved over a number of years and includes already-released tracks such as ‘Save Me The Weekend’, ‘Fingerprints’ and ‘I Don’t Know’. Collectively the songs have already clocked up thousands of streams, with ‘Fingerprints’, ‘Don't Know You No More’, ‘All The Hours’, ‘Save Me The Weekend’ and ‘Into Into You’ all making the Top 5 in the Official NZ Hot 20 Singles Chart. To celebrate the release, Ong will be hosting a listening party for all his fans on Sunday November 22 from 4pm, at Movespace on Dominion Rd, Auckland. Click attending here  Geoff Ong’s songs draw on personal experiences, making them relatable to his audience and MAYBE IT’LL BE ALRIGHT is no exception. See track-by-track below. He is proud to have achieved the milestone of releasing a debut record. “Making a full-length album feels like a big artistic statement to make, and until this year I don't think I felt ready to do that. But I think I've found a sound and a direction that I really love, and I've made a record that I'm really excited to share with people.” A jack of all trades (singer, songwriter, musician, producer and more!) Ong has been a part of Auckland’s music scene for the better part of six years. His penchant for creating relatable pop has earned him the respect of his musical peers and seen him amass a fanbase of discerning music aficionados.  “I think in order to explain something, you have to understand it really well, and to explain something in the format of a three-minute pop song you have to understand it really REALLY well! I feel like listeners connect to authenticity in music,” says Ong. “It is such a powerful artistic medium, because it sneaks its way into our subconscious and teaches us to be comfortable with vulnerability without us even knowing it.” Born and bred in Auckland, the early beginnings of Ong’s journey in music can be traced back to childhood when he started taking piano lessons. He also has vivid memories of digging into his dad’s record collection. “He had this great collection of music from his time living in London in the 1970s. I remember him showing me everything from Tom Petty to Joni Mitchell to Led Zeppelin to Aretha Franklin. It was like having a time capsule of that particular era of music.” Throughout school Ong played guitar in a few bands, but it was gaining a scholarship to study at the prestigious Berklee School of Music in Boston in the US, which fuelled his fire to pursue music seriously on his return to New Zealand.

In 2015 Ong released his EP BOSTON. He’s gone on to establish himself as an ‘artist to watch’ on the local indie-pop scene and his debut album MAYBE IT’LL BE ALRIGHT firms that up.

'Neon Ocean:
"Neon Ocean is a song I wrote about my first time traveling alone. I visited Tokyo and Hong Kong, two places which are unlike anywhere in New Zealand. I met some really amazing people and shared some wonderful experiences with them. Wandering around these huge cities well into the wee hours of the morning, surrounded by an ocean of neon lights, talking about everything and nothing all at once... That is a memory I want to hold on to for a long time."

'Save Me The Weekend':
"Honestly, the motivation for ‘Save Me The Weekend’ stemmed from a worry that all my music was getting a bit dour and humourless and brooding-singer-songwriter-y. I wanted to let loose and just allow myself to play around with feel-good songwriting again. ‘Save Me The Weekend’ is a song which celebrates how truly magical it can be to have a really fricken good weekend."

'Into Into You':
"I wanted this song to sound like the feeling of being swept up in a new relationship. A song that runs recklessly into the notion that love is one of the most pure and wonderful things we can experience. I feel like modern dating culture can make us super jaded and cynical - this song was written in deliberate opposition to that phenomenon. It's a reminder to stay open, to stay hopeful, to keep loving fearlessly, because LOVE IS REAL, no matter how much that makes me sound like a character from a Disney movie."

'Fingerprints':
"I first started writing this song when I moved back to NZ after living in America for a couple of years. It was a real weird time for me, it’s very hard to explain the feeling of returning home and yet somehow not feeling at home. It felt like this huge regression. It took me a while to navigate all my emotions and figure out how to let go of that time in my life - I wrote this song as a way to process all of that, and to allow myself to leave that chapter behind. This song was really the genesis of the whole album."

'I Don’t Know':
"At the risk of sounding hugely melodramatic, I wrote this song about that vague, creeping, inescapable sense of millennial angst which you can't put your finger on the source of. It's about struggling to figure out what's going on in your brain so you can actually explain it to someone. I suppose at the core of it, it's about our common desire as humans to be heard and understood, even when we don't entirely understand ourselves (hence ‘I Don’t Know’)."

'Over and Over Again':
"'Over and Over Again' is about a lot of the unhealthy behaviours I tend to have around social media. I feel like we’re all so hyper-stimulated and hyper-conscious of how we are perceived online, and honestly it makes me feel quite anxious sometimes. I’m constantly comparing myself and my life to other people’s - being in the music industry, it’s especially hard not to look at my friends’ successes and wonder what I’m doing wrong. There are so many complicated questions to think about when using social media. What am I comfortable sharing? What does this post say about me? How does that align with who I want the world to think I am?"'Don’t Know You No More':
“'Don't Know You No More' is about realising that someone who you used to know intimately is a stranger again. Like, ok, we're still friends on Facebook and stuff, and sometimes we might even do a heart react on each other's posts, but beyond that... I have no idea who they even are anymore. Sometimes it's a gradual realisation, but for me it was a sudden one, and that's what inspired the song.'All The Hours':
"I wrote this song about nostalgia, memory, and how it's bullshit that society tells us that we need to be productive all the time. Modern society seems to value productivity and hustle and grind over nearly everything else - even our self-care routines are thought of as ways to refresh ourselves so we can be productive again. Any time not spent in the pursuit of some goal or ambition is deemed to be wasted, and I think that really sucks. So, this song is about consciously placing value on those 'wasted' hours and recognising the value they have in shaping who we are."'Maybe It’ll Be Alright':
"This is probably the most explicit song I’ve ever written about my struggle with mental illness. I’ve lived with clinical depression for about 10 years now and it can be a REAL BUMMER LET ME TELL YOU. Some days you can do absolutely everything right - go out in the sun, exercise, eat healthy, clean the house, talk to people you love, and yet depression will somehow figure out a way to ruin it all. The mantra that I have learned to get me through my lowest moments is “maybe it’ll be alright”. Sometimes I really don’t feel that things are going to be ok... But if I can still say “maybe,” that gives me enough of a reason to want to find out."'Wreck Myself':
"Wow first a song about depression and now a song about anxiety! I’m great at parties. My anxiety often leads me to self-sabotage. The most annoying thing about this behaviour is that I know EXACTLY what I’m doing and yet I do it anyway! Sometimes deliberate failure feels more safe than the possibility of success - it’s like if I’m the one who’s wrecking myself, then at least I was in control of the whole situation, and I didn’t have to allow myself to be vulnerable and maybe get knocked down by some other external factor that I couldn’t control. I find that writing songs like these to be very therapeutic - it helps me to do some self-examination and to understand the root of why I’m thinking or feeling or behaving a certain way. Will it actually change my behaviour? Maybe! Recognising unhealthy behaviour is the first step towards getting healthy."