Since the late '70s, punk rock, youth and politics have gone hand in hand. The Sex Pistols hammered out a defiant 'Anarchy In The UK' as they cruised past the Houses Of Parliament in 1977. In 2020, Sit Down In Front's Cory Newman, who has been described as "Magically capturing the essence of a young Johnny Rotten" (Ambient Light) snarls "Don't Push The Button" as the threat of nuclear conflict continues. 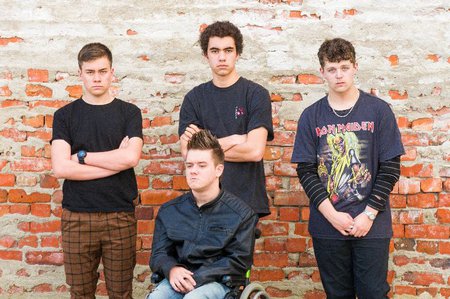 In their latest video 'Don't Push The Button' Sit Down In Front performs in the Oval Office while "Donald Trump" is having a freak out. He has childishly locked himself in and is playing with his toys which includes playing with the idea of pushing the button (for a nuke) as only he would. Surrounded by Oval Office memorabilia with former presidents of the United States looking on, the video is a visual of the political instability and deepening insecurity that is being felt around the world right now. Designed from a current picture of the Oval Office, the set, housed in a warehouse at Gisborne wharf took three weeks to build (and a week to pack down). Thanks to NZ On Air.

A 7 inch record hasn’t been pressed in Aotearoa in over thirty years. Holiday Records wanted to change that with Holiday Records 7 Inch Record Competition, a great opportunity for the local music community.Aspiring artists were asked to submit two original tracks and after receiving 350+ entries, alongside competition winners Na Noise, a Holiday Records 7 Inch Competition Compilation has been pressed which features 12 of competition finalists. Sit Down In The Front - ‘First World Problems’ is featured on this rare collection which is a snapshot of Aoteroa's current talent and New Zealand’s first 7 inch record since 1987. This is limited to 300 copies.

Since forming in January 2017, The Gisborne Punk-Rock band Sit Down In Front, whose members are all still in high school have been impressing fans in Aotearoa and abroad.

This four piece is lead from the front with frontman and lyricist Cory Newman (17), who uses a wheelchair due to his Cerebral Palsy, but whose energetic performances are enough to warm up and wow any crowd "magically capturing the essence of a young Johnny Rotten".  Backed up by talented Guitarist Jackson Clarke (16), impressive bassist Roman Benson (15) with multi-talented self-taught drummer Rikki Noble (16).

They self-produced their 2018 debut album Red Light Runner in the small-town of Wairoa, New Zealand, the first single from the album 'Runaway Chair' quickly racked up over 45,000 streams on Spotify. After placing first in the 2019 Smokefreerockquest East Coast regional final they went on to be placed third nationally in the band category of Smokefreerockquest and since have performed and toured Aotearoa with some of their favourite artists including Jimmy Barnes, Cold Chisel, Villainy, Aussie shed-rockers The Chats and local inspiration Skinny Hobos, John Toogood, The D4 and Head Like A Hole. Sit Down In Front closed out a successful 2019 with a performance on the Garden Stage at Rhythm & Vines.

Their new album Confessions Of A Pie Thief was recorded at Roundhead studios under the expert guidance of renown International producer Greg Haver (Manic Street Preachers, Opshop, Feelers). Lyrically the album centres around real-life situations, straightforward songs about stealing pies from the school tuck shop, karma, burning sausages on the BBQ or just having a bad day. The album was released in the midst of the global pandemic in June 2020, but that didn't stop the band sharing their punk rock dreams with the world.

"Gisborne teen punks Sit Down In Front are screaming into earshot and slamming their gritty new album Confessions Of A Pie Thief onto the table." - Undertheradar.co.nz
"‘First World Problems’ kicks off like a punch to the face, a magnificent little ditty about why people shouldn’t complain all the time about the small stuff. Sit Down In Front wear their influences on their sleeves, this particular track reeking of The Sex Pistols, Dead Kennedys and Bad Religion, and that’s just the first track! Elsewhere you’ll hear distinct undertones of Fidlar, early Turbonegro, The Clash and The Casualties amongst others." - Ambient Light Sit Down in Front’s brand of rock is built on the foundations of classic punk rock, they successfully capture the essence and energy of the old while creating their own, new, exciting, youthful sound. Collectively, the band are inspired by a wide range of genres from the 60s rock of the Rolling Stones and Beatles to punk bands like Sex Pistols and Green Day to the modern-day rock of Foo Fighters and Rage Against The Machine. New Zealand artists, Villainy, Shihad, Devil Skin, and Alien Weaponry have also all had a huge influence on the band.