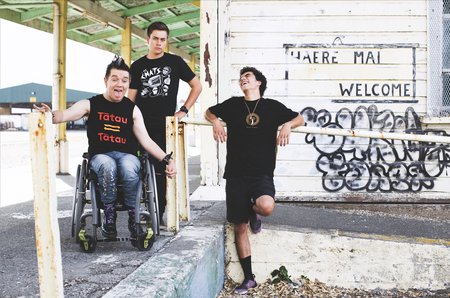 The band are also treating fans to a brand new video, for the high paced EP track 'Person Of Interest’.

"The phrase "Person Of Interest" is often linked or thought of as someone the authorities are interested in. But in this case, it just refers to someone who would rather put their hard-earned cash in the bank and earn interest rather than risk it on high wire deals." - Sit Down In Front

The video is set in a fictionalised 1987 version of a skype call (Zype). The Zype call is based on a financial planning workshop facilitated by Elonge Gatesafull, featuring a roster of eclectic participants who are ready to be converted from conservative individuals to high flyer investors.
WATCH VIDEO HEREThe rebellious rockers know how to deliver a fast and upbeat punk rock anthem with genuine charm and a good sense of humour. In October 2021, the band released their smash hit  'Pixie Caramel' featuring the legendary Tiki Taane which shot to the top of The Rock Radioscope Charts. This single followed the scorching slice of punk rock political commentary, 'Don't Drink Bleach', released in July 2021. All three singles feature on the new EP, produced by Greg Havers (Manic Street Preachers) alongside two brand new stonking punk rock anthems!

To celebrate the release of the EP the band will be playing a hometown gig at Gisborne's "home of good times" Smash Palace Bar Friday 21st Jan. Tickets are available from Gisborne Boardriders, Parafed Gisborne and Midway Surf Lifesaving Club and online athttps://www.eventspronto.co.nz/sitdowninfront.Everyone to the front!

Sit Down in Front's brand of rock is built on the foundations of classic punk. They successfully capture the essence and energy of the old while adding some scorching and youthful enthusiasm. The three-piece is led from the front by frontman and lyricist Cory Newman, who uses a wheelchair due to his Cerebral Palsy. His energetic live performances have seen him likened to "a young Johnny Rotten". Talented guitarist Jackson Clarke and multi-talented self-taught drummer Rikki Noble complete the line-up. Since forming in high school in January 2017, the Gisborne Punk-Rock band, have been impressing fans in Aotearoa and abroad. They self-produced their 2018 debut album Red Light Runner in the small-town of Wairoa, New Zealand, and after winning the 2019 East Coast Smokefree Rockquest regional final, they were placed third nationally. In 2020 they released their second album, Confessions Of A Pie Thief. "For their ripsnorter sophomore release, the four-piece took over Roundhead Studios with a hand from hotshot producer Greg Haver resulting in some mind-melting riffage and bass harmony, playing off of every punchy lyric belted out by sixteen year old lead singer Cory Newman" -undertheradar.co.nz "A bludgeoning blend of uncompromising rock and punk spirit" - Around The Sound Over the years, the band has toured Aotearoa with Aussie shed-rockers The Chats, Australian rock 'n' roll icon Jimmy Barnes, and local heroes John Toogood, The D4 and Head Like A Hole.In January 2022, the band will release their eagerly anticipated third major body of work titled, Fuelling My Rage, produced by Greg Havers (Manic Street Preachers).