Following on from 2020s political anthem 'Don't Push The Button', Gisborne punk-rockers Sit Down In Front have today released a scorching slice of punk rock political commentary, 'Don't Drink Bleach' - the first single to be taken from the band's forthcoming EP which is set for release in 2022. 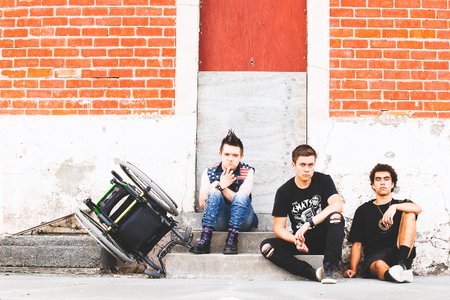 "Don't Drink Bleach was penned during a crazy time in world history when everyone was watching the news or listening to the radio waiting for updates on the state of the world. There were all manner of suggestions emerging from mouths of leaders around the world. One such comment that hit our ears was the concept of cracking open a bottle of bleach and taking a swig to kill the virus. This didn’t seem quite right, and the band felt compelled to warn the world against it.

In true punk fashion, this is an irreverent commentary on a comment made by the leader of the free world, during a time that will be remembered and talked about for generation to come." - Sit Down In Front

Sit Down in Front’s brand of rock is built on the foundations of classic punk. They successfully capture the essence and energy of the old, while adding some scorching and youthful enthusiasm. The three piece is led from the front by frontman and lyricist Cory Newman who uses a wheelchair due to his Cerebral Palsy. His energetic live performances have seen him likened to "a young Johnny Rotten". The line-up is completed by talented guitarist Jackson Clarke, and multi-talented self-taught drummer Rikki Noble.

Since forming in January 2017, the Gisborne Punk-Rock band, whose members are all still in high school, have been impressing fans in Aotearoa and abroad. They self-produced their 2018 debut album Red Light Runner in the small-town of Wairoa, New Zealand and after placing first in the 2019 East Coast Smokefree Rockquest regional final, they went on to be placed third nationally. In 2020 they released their second album, Confessions Of A Pie Thief.

"For their ripsnorter sophomore release, the four-piece took over Roundhead Studios with a hand from hot shot producer Greg Haver resulting in some mind melting riffage and bass harmony, playing off of every punchy lyric belted out by sixteen year old lead singer Cory Newman" -undertheradar.co.nz

Over the years, the band has toured Aotearoa with Aussie shed-rockers The Chats and Australian rock & roll icon Jimmy Barnes, as well as local heroes John Toogood, The D4 and Head Like A Hole.

Once again, under the expert guidance of renowned International producer Greg Haver the band are back in the studio balancing school with recording for their eagerly anticipated third major body of work set for release early 2022.