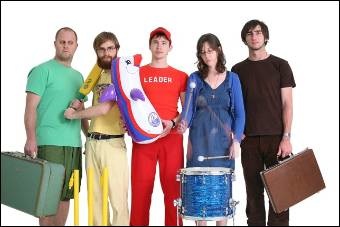 Recorded by David Parker (Artisan Guns, Bearcat, Teacups) at Little Monster Studios, “Newfoundland” adds energy and sharpened arrangement to the strong melodies of the band’s 2009 EP Soldiers. Strains of country, indie, folk and pop are melded into songs that sound like Bruce Springsteen remembering a tumultuous love affair with Gillian Welch between pained sips at a cup of tea.

You can download their first single, "Whales" for free here

The band will celebrate the release of “Newfoundland” at the Wine Cellar in Auckland on November 12 with Hold Dear before embarking on a North Island tour with Glass Owls.

“Everything here impresses for its vigour and assured enjoyment in making music.”
- Graham Reid – www.elsewhere.co.nz

“Soldiers is nothing if not a hint at some great things to come. Memorable melodies, toe-tapping ditties, strong yet considered vocals, and enough tricks up their sleeve to keep them unique.”
- Matthew Crawley – www.cheeseontoast.co.nz