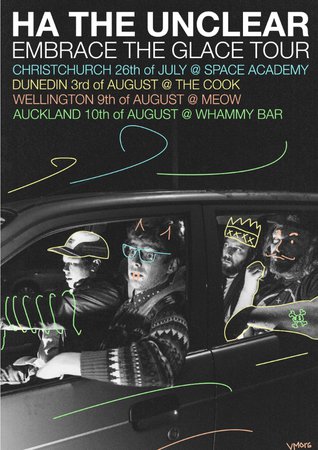 The release of 'Julius Caesar' comes a week after the announcement, Ha the Unclear have a song shortlisted for the second year running in the APRA Silver Scroll Awards. 'Where Were You When I Was All You Needed' comes from 2018's album Invisible Lines.

Sylvia Massy began her career as part of the San Francisco alt-punk scene in the all-female band Revolver. In the late 1980's she became an engineer at Larrabee Sound in Los Angeles engineering for Prince, Paula Abdul, Big Daddy Kane, Seal, andAerosmith.

Her production work with the band Green Jello led her to produce the "Undertow" and "Opiate" albums for Tool. She then began work with producer Rick Rubin, which included System Of A Down, Smashing Pumpkins, Tom Petty and Johnny Cash.

After a stint at Sound City Studios, she set up her own RadioStar studios in Weed, California. Massy now travels widely, holding seminars around the world to share her unusual techniques for manipulating sound.

Recording 'Julius Caesar'  Sylvia used techniques including plugging a guitar into a wedge of Gouda (yes, the cheese), running a guitar signal through a lightbulb, using live satellite delay on the vocals and rewiring an old op-shop phone on the fly to use as a drum mic.

A wonderful array of support acts are joining to Embrace the Glace and defend against the winter.Dolphin Friendly in Christchurch, Hot Donnas and Rezzy Crook in Dunedin, Nic & Reuben, Souldropin Wellington, and Skilaa and Daffodils in Auckland

Made up of Dunedin musicians Michael Cathro (vocals/guitar), Ben Sargeant  (drums), Paul Cathro (bass) and Theo Francis (guitar), Ha the Unclear have been charming the indie world with their off-kilter, guitar-driven pop songs that have seen them tour with Courtney Barnett, support The Shins, The Dandy Warhols and Jeffrey Lewis.