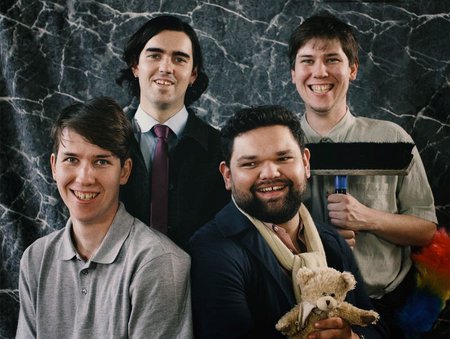 Firmly established at home, where Liz Stokes of The Beths has declared them "New Zealand's best band", Hans Pucket make their foray into North America with the announcement of their signing to Carpark Records (Cloud Nothings, The Beths) for the release of their second full-length album No Drama.


“People say ‘no drama’ all the time when they really mean at least, ‘some drama," laughs bassist Callum Devlin of the album title. “It works because No Drama is actually a super dramatic record.”

To mark the announce, the band are sharing the album's first single 'My Brain Is A Vacant Space', with a video directed by Samuel Austin with production and editing help from the band's bassist and celebrated music video director Callum Devlin.

Hans Pucket's second full-length album, No Drama gleefully captures the all-too-common twenty-something anxieties of talking too much and then being unable to find the right words to say. The album came together over several years, and during its creation, the band consisting of brothers Oliver (vocals, guitar) and Callum Devlin (bass), and drummer Jonathan Nott added multi-instrumentalist Callum Passels, who provided all the horn arrangements on the LP. Recorded with Jonathan Pearce of The Beths at his Auckland studio, the album is full of big leaps, immaculate arrangements, and a ton of immediate grooves. The result is Hans Pucket’s most sparkling and confident collection yet. While it’s danceable and fun, it’s also a thoughtful exploration of anxiety, a call for empathy in a turbulent time, and a relatable reminder that it’s hard to figure things out.

“We were very ambitious when we first started recording this,” says Callum Devlin. “Intentionally we left heaps of space in the tracks so we could add strings and horns. Because we were very measured and quite deliberate with the parts we had. It was a really fun process filling in the gaps.”

The lead single 'My Brain Is A Vacant Space' provides a great example of this exploratory production process, expanding the tight guitar pop of the original arrangement into a unique blend of sonic elements, as singer/guitarist Oliver Devlin explains, "This song deals with social anxiety, the fear of boring other people, and the struggle to say anything you really mean," Oliver continues, "I think part of it comes from worrying about people’s expectations of you, so you act in a certain way. The whole thing is exhausting."

Hans Pucket's No Drama is out on Carpark Records November 4th. It is available for preorder here.