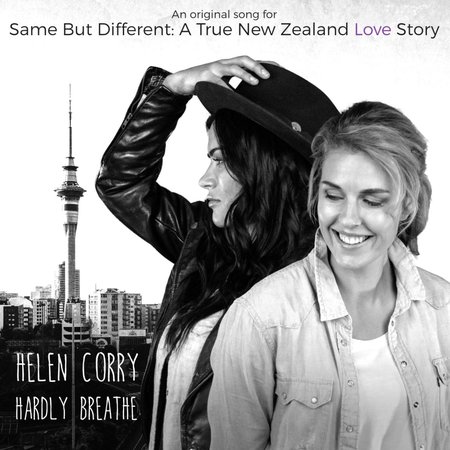 ‘Hardly Breathe' is a beautiful, heart-wrenching song that showcases not only Corry's exquisite voice, but the depths of her songwriting talents, alongside co-writer and producer, Rory Noble (DJ Mustard, Tinashe, Parris Goebel, Stan Walker, Watson).

‘Hardly Breathe' features on the soundtrack for Same But Different: A True New Zealand Love Story, a movie about its real life filmmakers, Rachel Aneta Wills and Nikki Si'ulepa, which will screen on March 28 at the Civic Theatre in Auckland, before general release in New Zealand cinemas on April 11.

Watch the video for ‘Hardly Breathe', which shows excerpts from the film.

Corry says she was compelled to write ‘Hardly Breathe' after watching the first edit of the film.

"I got an overwhelming feeling of how complicated relationships can be. What stuck with me the most was this concept of when love can knock the breath out of you.

Love can be agonising, whether it be unrequited or completely undeniable. It can put everything into perspective one minute and throw it all into a tailspin the next. But it's always the thing we strive for."

Corry is a renowned and respected singer, songwriter and performer, who's been at the heart of the Kiwi music scene for a number of years. She possesses one of most distinctive voices in New Zealand music. Last year she released the EP, LATER FOR THE REAL SHOW, featuring the hit singles Strike and La femme.

The film Same But Different: A True New Zealand Love Story, follows Rachel, a previously married Grey Lynn mum who breaks a three-year spell of singledom to pursue her escalating feelings for Nikki. Things don't go according to plan!

Screenings of the film are also planned for Melbourne, Sydney, San Francisco and other cities.

Corry will perform ‘Hardly Breathe' at the after party for the film's premiere.