Nigerian-Kiwi hip-hop artist Mazbou Q has today released his new single ‘To The Gates’ alongside a powerful and exquisitely shot video with a chilling narrative. 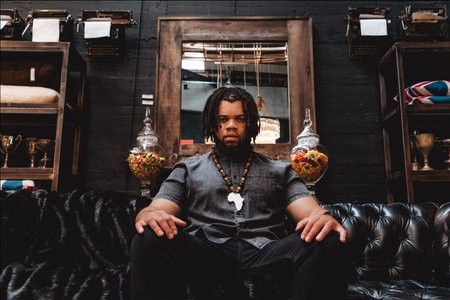 Listen to the single here.Watch the video here. With influences of soul and R&B, ‘To The Gates’ reveals a vulnerable side to Mazbou Q (formerly known as Unchained XL). The rapper and producer digs deep and delivers a song full of personal meaning. Themes of guilt, regret, and the search for absolution sit on top of an ambient, pulsing instrumental with haunting swells of backing vocals reminiscent of African-American spirituals. The self-produced ‘To The Gates’ – which is the first single from an upcoming EP - also showcases Mazbou Q’s powerful singing vocal alongside his trademark rap flow. The song is accompanied by a hard-hitting video produced by The Umbrella Creative, and directed by Corey Fleming. It depicts the last moments of a terminally ill woman. “She is reflecting on an incident in her youth resulting in murder and a panic-driven cover up,” explains Mazbou Q. “The protagonist is haunted by guilt as she faces death.” These cinematic scenes are juxtaposed with shots of Mazbou Q emotively performing the song against the symbolic backdrop of a blindfolded church choir. Mazbou Q is a UK-born, Tāmaki Makaurau based Nigerian Kiwi rapper and producer. His unique musical background of golden-age hip-hop, West African highlife and heavy metal forms the backdrop for his non-formulaic style of hip-hop inspired by the likes of Fela Kuti, The Roots and Oddisee. Mazbou Q frequently confronts his listeners with an unapologetic style of socio-political commentary, yet is unafraid to also bring them on a more personal journey of navigating the complexities of his unique cultural identity. Formerly known as Unchained XL, 2018 saw Mazbou Q’s reach expand globally as he toured across the UK performing alongside artists such as Mungos HiFi, Eva Lazarus and Afrocluster. His 2019 EP THE MIGRANT MIND received global attention after having featured on internationally renowned blog OkayAfrica. Drawing from his experience as an ex-metal vocalist, Mazbou Q consistently delivers highly energetic and convicting live performances that leave his audience seeking more.