Kathy Bates Motel is a new music project by Joe Lonie (Supergroove) with a lot of help from his friends Morgan Leary (Cindy), Jolyon Mulholland (Mulholland) and Milan Borich(Pluto). 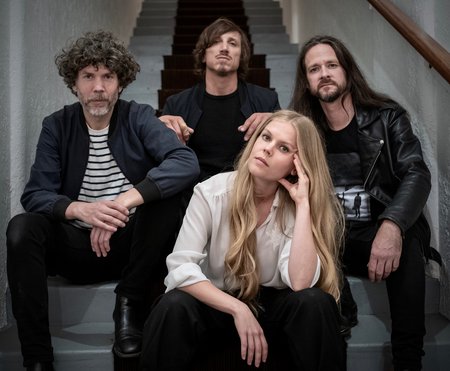 The bones of their debut song 'Damaged Goods' - released today - go back to a bunch of songs Joe wrote quite quickly in response to Supergroove breaking up. "I remember blocking out the guitar chords to Damaged Goods in my Mum’s kitchen and trying to find a melody. When I stumbled onto the chorus melody it made me cry instantly and I felt like I had something worth pursuing. That melody never changed, and the music for the song has remained pretty much constant"

The song is about co-dependancy, to depict a situation with an understanding of both sides - something which is cleverly expressed via Morgan singing lead. The band brings energy, sass, personality and humour to it with their spirited playing and relaxed, unsentimental interpretation. With the help of Jol’s tasty engineering and inventive, creative production, they’ve taken a sad song and made it fun!


Kathy Bates Motel have done things a bit backwards. They’ve never played a show, but they’ve recorded a full album of nine original songs and a cover of the Robert Palmer song 'Johnny and Mary'. It’s something of a concept album chronicling the details of the rise and fall of a relationship looked at from both sides with self-effacing humour and unflinching honesty.“The name, KATHY BATES MOTEL, is fairly evocative of our music. It's an out-of-the-way place you can go to that’s modest, affordable and comfortable, although you may be murdered in the shower or have your ankle broken with a sledgehammer. We don’t take ourselves too seriously, despite sometimes singing about grim aspects of life.” - Joe Lonie.The original demos for the album were recorded in Joe’s kitchen over the winter months of 2018. The recordings were roughly mixed by Joe and pitched to engineer/producer Jol "musical maestro" Mulholland in The Oven at The Lab. That’s when Jol came on as producer. First choice for drums was Milan Borich of Pluto fame. The feeling was that the songs would be brought further to life by Milan’s smooth groove, sense of humour and songwriter’s sensibilities. With no time or option for rehearsal, Milan put down the drum tracks for all ten songs in a day and a half at the Lab just a week before Christmas 2018. With the drum tracks ready to go, Joe and Morgan returned to the oven with Jol to begin the task of replacing all of the guitars, bass, keyboards and glockenspiel previously recorded in Joe’s kitchen. The first KBM song completed was 'Damaged Goods'. Off his own bat Joe decided to produce, direct and edit a music video for it. The video was shot by cinematographer Duncan Cole in the old community hall next to the Hollywood Cinema in Avondale. Over the years, Joe and Duncan have collaborated on numerous music videos as well as commercials and short films, but it had been some time since they’d had the opportunity to work together. They got back in the groove and created a video very much in line with the slick camerawork and ironic humour of their earlier works for Goodshirt, Liam Finn andThe Finn Brothers.Currently, Kathy Bates Motel are finishing the album, and pre-producing the next crop of videos. There may be the possibility of live performances in the future.

As well as being a musician, Joe is an award-winning director and screenwriter. Some of his notable works include the Goodshirt “one shot” music videos and the short film Honk If You’re Horny. Since cutting his songwriting teeth as a teenager in Supergroove, Joe’s approach to songwriting has gone through many different stages that have brought it closer in line with his screenwriting. Most of the songs for Kathy Bates Motel have emerged from a TV series that he is writing."A TV series is a massive undertaking and all kinds of stars have to align for it to ever happen. A lot of these songs are integral to the show and I wouldn't have written them if it weren't for the show, but if it never actually gets made I didn’t want the same fate for the songs. I couldn't get them out of my head. I wanted to make them anyway and give them a chance to be heard.”