Electrifying songstress Isla Noon elevates her music to the next level with the release of her third single ‘I Need To Go Home’. With this follow up to her ‘ear worm of a track' ‘Talk About Us’ Isla Noon solidifies her unique, and highly addictive, brand of high-brow pop - mesmerising audiences in New Zealand, Australia and beyond. 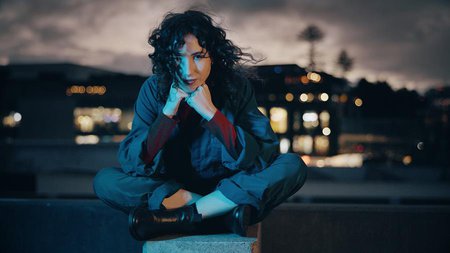 ‘I Need To Go Home’ transports us to a ‘night out on the town’ with friends - with being out of sync with the mood of the party and the abrupt realisation that it’s not your scene in the slightest (“Am I the only one here who feels like they’ve woken to a bad dream?”). When we find ourselves in a place where we feel no sense of belonging there is often a real urge to escape it. The lyrical journey of ‘I Need To Go Home’ captures the inner chaos of attempting to fit into the crowd whilst honouring those intense gut emotions that signal that you’re in the wrong place at the wrong time.

Isla Noon is fast making a name for herself by cleverly packing emotionally charged lyrics into danceable anthems.

‘I Need To Go Home' is the result of Isla Noon's long running collaboration with co-producer Maude Minnie Morris  (LEXXA, VALKYRIE, XEMO) - who has occupied the producer’s chair for all of Isla Noon’s releases to date. The pair are clearly onto a winning recipe here, cleverly blending a perfect ratio of 80’s inspired drums, analog synths with sophisticated and polished pop vocals that soar above the music - entrancing the listener from the get go.

‘I Need To Go Home’ is accompanied by a slick music video from The Umbrella Creative, directed by Swap Gomez and Oshara Ardelean – which deftly captures and enhances the mystique and intrigue of Isla Noon. Shot ‘guerilla style’ - hand held camera, dodging night duty security guards - to capture the industrial playground and expansive landscapes of her hometown; the visuals are evocative, raw and reflective. Bringing a new physicality to the project that foreshadows her ‘on-stage’ presence. Isla Noon’s performance is both energised and committed.

Video by The Umbrella Creative

Speaking on the making of the track, Isla Noon says “There’s an urgency to the emotion of this song that spilled over into every other element of the songwriting and production. I wanted to capture that urgency and bottle it, wrap it in a rhythmic feel that makes you want to move to it - embrace uncomfortable moments in life that teach you something about yourself, and push you in to taking action”