Jazmine Mary is a Neo Folk Artist based in Tāmaki Makaurau (Auckland) who originally hails from Gippsland Australia. Their surreal rose-tinted sounds allows listeners to be transported somewhere bold and watery. 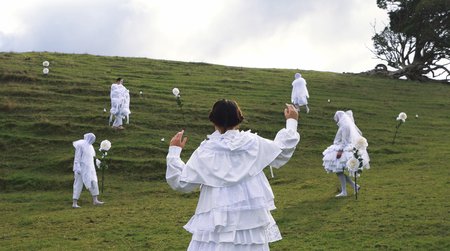 Today they share the video for 'Move Me', the second track from their debut album The Licking of a Tangerine (released independently on February 14, 2021).

The NZ On Air Music funded visual for Move Me finds Jazmine Mary with company, indulging in some form of pastoral psychedelia. The meaning of the hanging fish, anomalous movement and white outfits are all being played close to their chest, with Jazmine Mary preferring the viewer to infer their own interpretation of the events. Keen viewers will spot appearances from frequent collaborator Peter Ruddell (Wax Chattels, Sulfate) and as well as visual and performance artist Misty Frequencies.

Throughout the next couple of months Jazmine Mary will be playing a handful of shows throughout Te Ika-a-Māui (North Island).
The first four will see Jazmine team up with Pōneke folk musician Fraser Ross. They'll perform in Auckland's Move Space on July 22, at Raglan's Old School Arts Centre on July 23, a pop up show in New Plymouth on July 24, and finally finishing at Wellington's Vogelmorn Hall on July 25. Tickets are available from Undertheradar.
In August Jazmine will support Kane Strang in Tamaki Makaurau (Auckland) when he performs at Whammy Bar on August 6. Tickets are available from Banished Music.
Jazmine Mary is a Neo Folk Artist based in Tāmaki Makaurau (Auckland) who originally hails from Gippsland Australia. Their surreal rose-tinted sounds allows listeners to be transported somewhere bold and watery.Earlier in 2021 Jazmine Mary released their debut album The Licking of a Tangerine, a record which RNZ praised with“these beguiling, transportive songs will have me coming back to this album for a long time.”  Lead single Dancer was a firm favourite through Aotearoa's Student Radio Network, and Undertheradar called it a "genius of mixing the morose, the gross, and the hilari-ose..."The Licking of a Tangerine was recorded with their bandmates Courtney Rodgers, Peter Ruddell (Wax Chattels, Sulfate) and Dave Kahn (Marlon Williams, Reb Fountain).
Back to Artist News