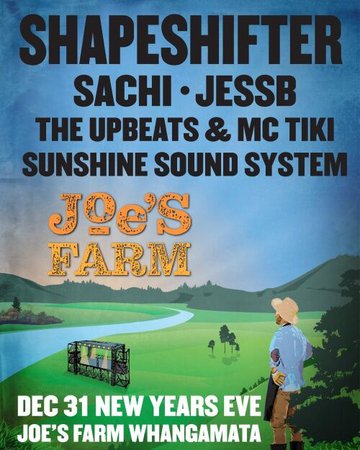 To heat up celebratory proceedings as we enter into a new decade and ring in the New Year, the Joe’s Farm Campsite brings you the Afternoon Delight Stage with performances by Persian-Kiwi rapper/producer CHAII, young singer-songwriter TOM VERBERNE and alt-blues singer SOLOMON CROOK.

With its own fully set up food and beverage area to cater to those who are preparing to settle in for a final 2019 party, the Afternoon Delight Stage will set the tone early in the day by smashing out good music, vibes and food from 1:00pm – 4:30pm.

Organisers will open the campground from 10:00am on December 31st, so music fans can get into the new, lush venue early to set themselves up and get on with bidding farewell to the decade and welcoming in 2020!

Wellington indie singer – songwriter and producer Tom Verberne, has been releasing music online since the age of 13. Now 19, Tom’s debut album “All Kinds of Red” attracted hundreds of thousands of streams from listeners worldwide last year. This year he has released 'Didn't Have You', quickly followed up by ‘Hit Me Back’ last month, a dreamy soundscape of hip hop influenced drums melded with lyrics of longing and unrequited love. With songs that intertwine aspects of ambient music with electronic drum production, Tom’s music creates a euphoric experience and his sophomore album “Hopelessly Hopeful” is planned for release in January 2020.

Local lad Solomon Crook creates blends of honest song writing and soulful vocals, to form heartfelt music that is relatable and unique. Solomon writes most of his music from his childhood home, hidden from distractions, on the Coromandel. He then spends the rest of his time in Wellington writing and collaborating within its rich arts scene. He has just released his new single ‘The Day I Thought About Dying’, the first track from his upcoming EP, set for release 2020.

New Year’s Eve 2019 at Joe’s Farm in Whangamata will be a night to remember - a new party, a new location, a new decade!

Tickets on sale now from joesfarm.co.nz

Overnight camping on site and a free shuttle bus service from Whangamata is available. For more information, go to joesfarm.co.nz