JOIN SIX60 FOR THE PREMIERE OF THE FILM

Fans will have the chance to buy exclusive tickets to join New Zealand’s biggest band at the Auckland and Dunedin premieres, before its nationwide release. 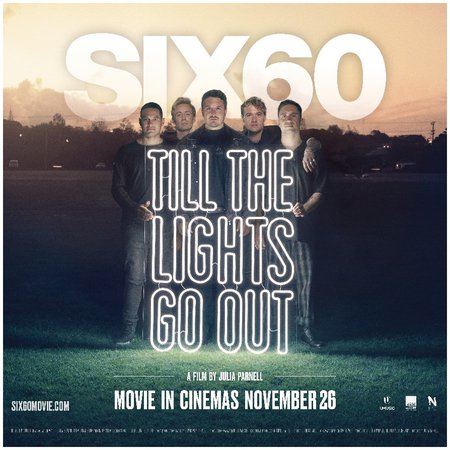 To celebrate the release of the feature film Till the Lights Go Out, SIX60 are giving fans the chance to attend the film premieres at The Civic Theatre in Auckland on November 23rd, and The Regent in Dunedin on November 19th. Tickets will be available to purchase from 8am on October 24th here:https://tix.to/TTLGO With red carpet access and the chance to rub shoulders with the band, fans will need to be quick to get their hands on the limited number of tickets to attend the premiere before its nationwide release on November 26th. Produced by Notable Pictures in association with the New Zealand Film Commission and NZ On Air, and directed by award-winning producer, and director Julia Parnell, Till The Lights Go Out showcases the band as they've never been seen before. Harnessing the fighting spirit of the rugby field, the documentary-style feature-length film shows how SIX60 transformed from humble beginnings into musical domination previously unseen in Aotearoa. As part of the film's release, Air New Zealand will also be flying each band member back to their hometown regions to host a series of hometown premieres in Invercargill, Napier, Gisborne, and Whangārei. Dedicated to those in the community who have supported them from the beginning, tickets to the hometown premieres can be won at https://www.airnewzealand.co.nz/premiere-in-the-air The film kicks off a busy summer for the band with the return of their classic gigs, SIX60 Saturdays. The summer tour will take place through January and February 2021 across Waitangi, Hastings, New Plymouth, Christchurch, Wellington and Hamilton. Tickets are on sale now at www.six60.co.nz

For the latest updates on Till The Lights Go Out visit
https://six60movie.com