Critically-acclaimed Aotearoa singer and songwriter Kendall Elise has put her own unique spin on an iconic 70s song from rock pioneer Suzi Quatro. 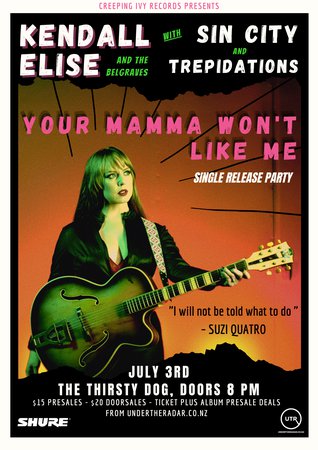 Out June 11, ‘Your Mamma Won’t Like Me’ is the second single from Kendall’s upcoming album, which is due for release this year.  Listen HERE Kendall masterfully puts her own spin on the title track to rock pioneer Suzi Quatro’s iconic 1975 album YOUR MAMMA WON’T LIKE ME, bringing a rockabilly vibe to a track originally steeped in rock ‘n’ funk. It sees the meeting of two undeniably powerful forces; Kendall’s magnetic and mesmerising toe-tapping energy, and the sexy swag Suzi poured into the track during its reign over the charts in the 70s.  For Kendall, ‘Your Mamma Won’t Like Me’ encapsulates being unapologetically yourself. “It represents reaching a point of caring less about what others are going to think of you, and consciously owning and being who you are. It’s about speaking your mind and not letting anyone try to define you - which I feel Suzi really embodies.” The song is accompanied by a video which was directed, edited and produced by award-winning, queer, Māori director Amber Beaton.  Watch the music video HERE Shot in Taupō at ACT2 Visual and Performing Arts School, the video channels energy from the iconic PJ Harvey performance video for ‘This Is Love’. “We wanted to use my performance to communicate what the song means while reflecting the authenticity and attitude of the song, and give people a little taste of what they could expect from my live energy,'' Kendall says.With an impressive career to date, Kendall has toured with and opened for the likes of Midge Marsden, Tami Neilson, Larkin Poe, Gin Wigmore and Bic Runga. In 2019, she released her debut album RED EARTH, which debuted at #12 in the NZ Music Album charts and earned Kendall a spot in the Top 3 finalists for the 2020 Recorded Music New Zealand Best Country Artist. Most recently, the first single from Kendall’s upcoming album, ‘Between Hello and Goodbye’, was announced as a finalist for the APRA Best Country Music Song in the 2021 Country Music Awards.To celebrate the release of ‘Your Mamma Won’t Like Me’, Kendall Elise and her band, The Belgraves, will perform at The Thirsty Dog in Auckland on Saturday July 3. She will be joined by special guests Sin City and Trepidations. Tickets are on sale now from Under the Radar HEREStay tuned for more from Kendall Elise in 2021, including her sophomore album, which once again raises the bar for one of New Zealand’s most intriguing and beguiling artists.  Listen to ‘Your Mamma Won’t Like Me’ HEREWatch the video HERE