23 NOVEMBER, 2022: In perhaps the collaboration of the decade, long time indie-rockers Voom have paired up with their pal Fazerdaze to record and release the band’s first new music since 2006 — ‘Magic (ft. Fazerdaze)’ out via Flying Nun Records. 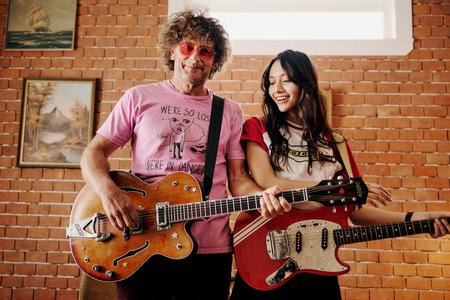 Alongside the new single comes a light-hearted music video, directed and shot by prolific film-fella, Ezra Simons and made with the support of New Zealand on Air. Without offering up spoilers, the video’s upbeat narrative sees Fazerdaze (Amelia Murray) as a die-hard Voom devotee, with absurd consequences.

Outside of this cinematic world, Fazerdaze herself is an extremely distinguished and internationally recognised artist in her own right. Having recently returned to the public eye with her brand new EP, Break!, 2022 sees the artist’s first new work in over five years.

Voom and Fazerdaze are both making rare appearances on stage in Aotearoa THIS weekend — Voom is playing at Flying Nun's 'Beautiful Things' showcase in Auckland on the 26th of November, and Fazerdaze is visiting both Wellington (25th Nov) and Auckland (26th Nov) in celebration of her latest EP, Break! — tickets for all shows available from Undertheradar.

Since Voom’s inception began in the early 90s, the band has amassed a diverse cult following. Buzz Moller and the late Andrew “Mac” MacCaskill quietly worked away in their basement for many years before the public heard anything from Voom. DannyManetto had joined the band on bass, and they played many shows around New Zealand before revealing the highly acclaimed debut album Now I Am Me in the year 1998.

The band’s 2006 sophomore album, Hello, Are You There? was critically received and landed a top spot in the hearts of many New Zealand music lovers and critics. In 2002, one of the songs that would later be included on this release, ‘King Kong’, had been nominated for an APRA Silver Scroll. Hello, Are You There? went on to be listed in good company, amongst the "100 Essential New Zealand Albums" in a book of the same name, written by prominent music critic, Nick Bollinger.

Flying Nun Records reissued Hello Are You There? in 2021, to an incredible NZ (and international) reception. The album hit the charts on both the NZ Top 20 and Official Top 40, and the band sold out their album release show at the Hollywood Avondale.