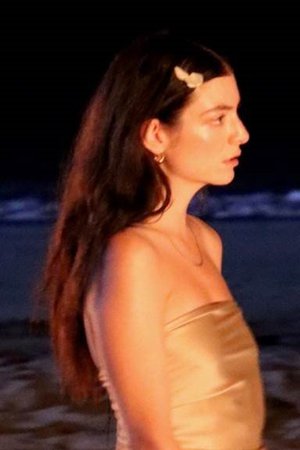 Of the bonus tracks LORDE says, “These songs were fun explorations on the album journey. They didn’t quite fit into the tracklist for whatever reason but they’re both big tunes.”

Of “Helen of Troy” she says, “We wrote it super quickly in the tiniest room at Westlake where we did a bunch of Melo and it was fun the whole time. It’s super off the cuff lyrically, almost ad-libbed, and you can hear me starting to figure out some album themes...”

When writing of “Hold No Grudge” she says, “HNG is a sort of composite portrait of when relationships turn sour, being trapped in the ice but remembering the warmth.”

Of the “Fallen Fruit” music video LORDE says, “In the Solar Power video, you were introduced to the island as a lush paradise — glistening water, blue skies, not a grain of sand out of place (barring that pesky beach trash…). Cut to: humans doing as they do, getting greedy, treating the land with disrespect and stripping it of its beauty. There’ll always be another pristine place to start again, right? The gardens that were once lush and fruitful are now on fire. The fishing boats are busted up and overturned. All that’s left of the peaches are their pits. Amid all that, my character makes a choice.”

The artist’s latest visual gives fans a deeper look into the universe of Solar Power. Depicting human destruction and the Global climate crisis, the video is a powerful statement of the times.

The two bonus tracks were originally debuted exclusively on the Music Box and are now available at DSPs everywhere.

In 2013, a 16-year-old LORDE quietly, yet confidently asserted herself as the voice of a generation with her full-length debut, Pure Heroine. The album would go triple-platinum, win two GRAMMY® Awards, and spawn the certified Diamond, record-breaking, international juggernaut single, “Royals,” and quadruple-platinum follow up “Team.” The former cemented LORDE as “the youngest solo artist and the only New Zealander to achieve #1 on the Billboard Hot 100 since 1987.” Time exalted her amongst the “Most Influential Teenagers in the World,” she landed on Forbes’s “30 Under 30” List, graced the cover of Rolling Stone and performed alongside Nirvana during the 2014 Rock and Roll Hall of Fame Induction Ceremony. She also curated the official soundtrack for The Hunger Games: Mockingjay – Part 1 and recorded “Yellow Flicker Beat” as the lead single. In 2017 LORDE released her second full-length studio album, Melodrama which debuted at #1 on the Billboard 200 Chart, making her the first ever NZ artist to land a #1 debut album in the United States. The album reached #1 in over 45 countries and earned LORDE a nomination for Album of the Year at the 2018 GRAMMY® Awards. LORDE makes her highly anticipated return with critically acclaimed new single, “Solar Power,” from her third full-length studio album, Solar Power, out now. LORDE currently has over 12 million albums sold worldwide and over 10 billion streams worldwide.