Lyttelton musician Kate Owen launches a story-driven accompaniment to her debut album, Not A Proper Girl, with the Behind The Songs series.

This personally crafted layer of candid storytelling, which invites us to get up close and personal during these socially restrictive times, is available to view now through
www.kateowen.co.nz  Initially created to fill the void of a planned live tour, which was cancelled due to the Covid-19 pandemic, the new project visually elaborates on the themes of Kate’s long-playing debut, through the exploration of the personal topics that underpin her March release. This series of short films, conceptualised, directed and edited by Kate herself, is on one hand an expansion of her musical work, and on the other, an intimate discussion with Kate as she shares her observations and anecdotes distilled from her life’s journey. Kate has collaborated with NZ musicians Emma Cameron (Emma Dilemma/Decades) and solo artist Katie Thompson on the digital realisation of the project, which was made possible by the Creative New Zealand Arts Continuity grant. The Not A Proper Girl project is a conceptual study of isolation, but also connection and analysis of modern expectations - built by the experiences of a woman in a modern world where life has not become a fairytale. Mental health, suicide, femininity, addiction and the commercial modelling of romantic love are all addressed. Collectively, the candid pieces to camera that accompany each track offers power to the female experience and allows us to question through our own lens, ‘what IS a proper girl’? Thought provoking, comforting and bold, Not A Proper Girl removes the rose-tinted glasses on womanhood in the modern age. The content journey entices us to be a little louder and to not diminish our experiences, whether they be good or bad. It invites us all to be proud to tell our stories.

Kate Owen will bring her nous for story-telling and material from her critically-acclaimed debut back to the stage with a series of intimate live dates, resuming her Covid-cancelled album tour in celebration of the Behind The Songs project release. She will be joined by Christchurch musicians Moses Robbins (guitar), Thomas Isbister (drums) and Kurt Preston (bass). Kate will also record a live set on the 26th of September as part of Alex Harmer’s Ōtautahi Live sessions. This live version of the album will be released in November via www.kateowen.co.nz. 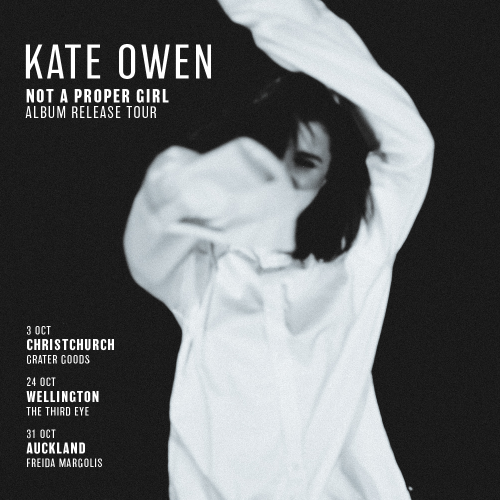 Kate’s debut album, Not A Proper Girl was released 13 March, 2020. Recorded with Ben Edwards (The Sitting Room, Lyttelton), the album showcases Owen’s songs with rich textures including synth and strings, and strong rhythmic pulses from live kits and drums machines.  The result is an album with a sound that has been likened to PJ Harvey, Anna Calvi and Sharon Van Etten.

Reviews for Not A Proper Girl

“Not a Proper Girl feels cohesive and coherent… She deserves to be heard and seen.” – Graham Reid, Elsewhere

“Not a Proper Girl’ is a sophisticated, introspective and beautifully put together, and places Kate Owen on the map as an artist to watch.” – NZ Musician

ABOUT KATE OWEN
A singer with a poetic, restrained intensity, Kate Owen has been song-writing for twenty years and performing live for a decade, but until now has never recorded an album. Her sound ranges from stripped-back laments to 90’s pop anthems. Her debut album Not A Proper Girl showcases Owen’s songs with rich textures including synth and strings, and strong rhythmic pulses from live kits and drums machines. Owen lives in Lyttelton.

Kate Owen’s debut album Not A Proper Girl is available now through Spotify, Apple Music and Bandcamp, with physical copies available through select retail outlets. The Behind The Songs visual project is available to view through a subscription process at www.kateowen.co.nz. Sign up here to gain access to the full suite of exclusive content.