Changing their look just before heading out the door, premier Kiwi music festival Maki has announced that all scheduled bands will now perform on a single day. 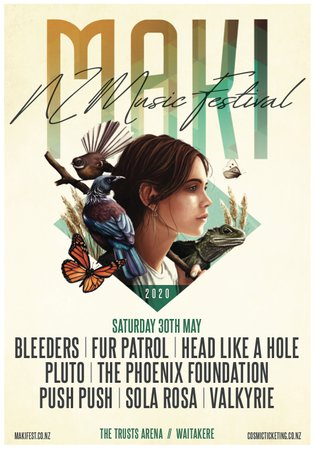 Rock royalty The Bleeders, FurPatrol, Head Like A Hole, Pluto and others will now appear on Saturday 30th May at Waitakere’s Trusts Arena, with the event running from 12pm till 1030 pm, rather than across two days.
“We received some great feedback from early ticket buyers that the preference was for a one-day
show” explained event organiser and owner, Sam Flynn. “And we listened. The event will now be
higher in energy, and easier for people to enjoy in its entirety than it was as a two-day gig.”
Maki is intended to be a fresh take on the classic festival, with Flynn hoping that it paves the way to more modern, accessible music events on the calendar for Waitakere.
”Maki is about good people, good music and a scene that anyone can be a part of. All the best bits of Aotearoa.”
The full line up of bands performing at Maki:
The Phoenix Foundation, Push Push, Sola Rosa, Fur Patrol, Head Like A Hole, Pluto and Valkyrie, with Blindspott now doing their own solo tour dates.
Back to Artist News